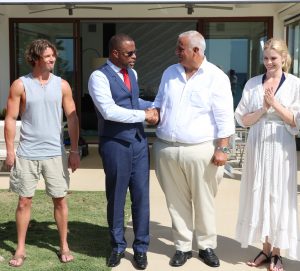 NIA CHARLESTOWN NEVIS (February 25, 2021) – – Hon. Mark Brantley, Premier of Nevis, has welcomed the announcement by MSR Media producer Mr. Philippe Martinez that the UK film and television production company intends to shoot a total of six films on the island.

Mr. Martinez’ announcement that a total of six films will be shot on Nevis came while the Premier was visiting the set for the first day of filming for “One Year Off” at Chrishi Beach, Nevis.

Mr. Brantley told the Department of Information, “The announcement today that the original two movies to be filmed in Nevis has increased to six movies is great news for the island and the fledgling film industry that we are seeking to develop.

“As my government seeks to diversify the Nevisian economy we are happy to have brought MSR Media to the island and appreciate that this industry will benefit the entire Federation with jobs and activity created across St. Kitts and Nevis.”

Mr. Martinez revealed MSR Media’s intention to shoot all six movies on the island over the next year.

“We’re going to make more movies here; since we’re here everybody loves it.

“So we’re discussing with the Premier about doing six movies over the next twelve months which is becoming a big partnership.

“But all of that has been possible because of Mark’s vision, so we are the pioneer to make this vision possible… It’s a big project for Nevis,” he said.

He thanked the Premier for his hospitality and partnership and extended thanks to the various government ministries and officials who continue to assist the film company’s undertakings.

“I would like to thank Premier Mark Brantley. We spoke first right before Christmas [2020]. He told me about his vision to build a film industry in Nevis and I thought it was exciting, because sometimes politicians don’t see the bigger picture of the film industry.

“This is an industry that brings tremendous publicity, we’re creating jobs. We brought a team from the UK, from Bulgaria, from the US, and one of the missions of our team is to teach the art of making movies to people from Nevis and people from St. Kitts, so it’s a big thing,” he said.

MSR Media and the Nevis Island Administration (NIA) signed an agreement for the production of two films on Nevis in 2021, the first being One Year Off, which is schedule to finish filming in May 2021.

For the first film, ‘One Year Off’ thirty two locals and residents have been hired full time with the film crew, eight have been cast for speaking roles in the film, and over 160 persons have secured roles as supporting artistes. 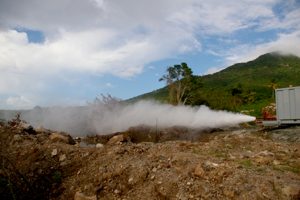 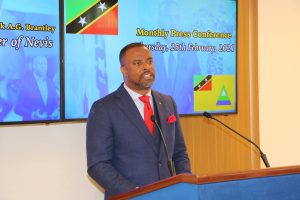 Hon. Mark Brantley, Premier of Nevis congratulated the Four Seasons Resort, Nevis on its 30th anniversary of operations on the island.  It was opened on February 14, 1991. The following is an announcement from the Ministry of Human Resources in the Nevis Island Administration (NIA) regarding short training courses offered online by the Government of India.

The following is an announcement from the Ministry of Human Resources in the Nevis Island Administration (NIA) regarding study opportunities in Romania.