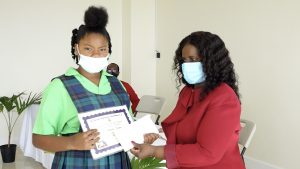 Seven primary school students on Nevis are the beneficiaries of the first Naomi Daniel-Browne Scholarship, an initiative of the Nevisian Association of Washington DC (NEV-DC). 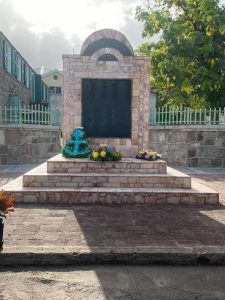 NIA CHARLESTOWN NEVIS (August 05, 2021) – – Although the MV Christena Disaster occurred 51 years ago, the family and friends of more than 200 victims still mourn the loss of their loved ones.

Speaking at the commemorative service for the 51st anniversary of the MV Christena Disaster held August 01, 2021 at the Christena Memorial on Hunkins Drive, Charlestown, Pastor Delroy Josiah said the annual service is meant to honour those lost at sea and perpetuate the memories of loved ones.

“Although this incident would have taken place 51 years ago, the loss, the hurt the pain, is still real for many families and friends and I dare say acquaintances… Persons still shed tears. When a person dies we not only lose them physically, but there is the threat of losing them mentally and emotionally, and while people grieve differently we all would like to perpetuate those feelings and those memories that we have of our loved ones,” he said.

Following the reading of the names of those who perished several dignitaries including Her Hon. Deputy Governor-General Mrs. Hyleeta Liburd and Premier Hon. Mark Brantley laid wreaths at the memorial.

The MV Christena ferry went under just off Nags Head en route to Nevis from St. Kitts on August 01, 1970. The passenger capacity was 155, but that afternoon the ferry had approximately 320 people on board.

It remains the single most devastating disaster in modern St. Kitts and Nevis.