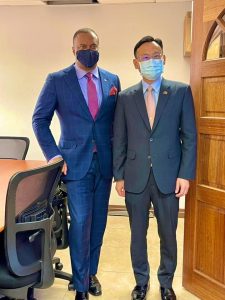 NIA CHARLESTOWN NEVIS (September 14, 2021) – – Premier Hon. Mark Brantley has hailed the investment made by the government and people of the Republic of China (Taiwan) in the area of security, as a significant act of generosity with regard to the safety of the people of Nevis and the wider Federation.

The Premier, who is responsible for Security in the Nevis Island Administration (NIA), was at the time speaking at the recent commissioning of the closed-circuit television (CCTV) Command Centre in Charlestown. The Taiwanese government, through its Embassy in St. Kitts and Nevis, contributed in excess of $1.8 million towards equipping and furnishing the centre.

“This edifice here represents a collaboration. The Nevis Island Administration that I am privileged to lead at this point in our history, would have funded the construction of the building…and through the collaboration with the government and people of the Republic of China (Taiwan) and the Federal government we now have the equipment we can deploy to make this building a first-class facility for crime detection and crime prevention.

Mr. Brantley expressed his appreciation to His Excellency Michael Lin, Ambassador of the Republic of China (Taiwan) to St. Kitts and Nevis, who was also present at the ceremony.

He thanked the Ambassador and his country for the tremendous help and partnership that they have supplied to St. Kitts and Nevis over the years.

“It is my hope that that relationship will continue from strength to strength and that the people and police of Nevis would recognize that in securing our island, the government and people of the Republic of China (Taiwan) have made a significant investment. So thank you, Your Excellency, for that and your continued commitment.”

Ambassador Lin said he was pleased that Taiwan has played a part in the rollout of the CCTV network in St. Kitts and Nevis.

The Republic of China (Taiwan) has been instrumental in St. Kitts and Nevis’ employment of CCTV technology, contributing millions of dollars towards the acquisition of the necessary equipment, in addition to supplying technical expertise through Vivotek, a leading manufacturer in the network video surveillance industry.

The CCTV surveillance system, the latest crime-fighting tool to be implemented by law enforcement agencies in the Federation, is expected to help authorities not only with crime detection, but also crime prevention by acting as a deterrent to would-be offenders.