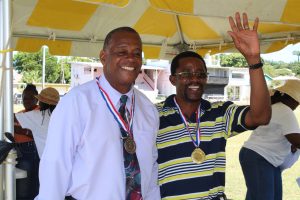 NIA CHARLESTOWN NEVIS (February 15, 2022) — As tributes continue for the late Chesley “Faro” Davis who transitioned on February 08, 2022, Hon. Eric Evelyn, Senior Minister in the Nevis Island Administration (NIA), spoke of the immeasurable contribution Davis made to Nevis through community development and culture.

“As we continue to come to grips with the untimely passing of Mr. Chesley “Faro” Davis, I would just like to pay my tribute as the Minister with responsibility of Youth and Sports, Community Development, Culture which he would have made so much contribution to over the years here on the island of Nevis.

“He was an MC par excellence; he did an amazing job and it is something that of course, when we saw him MCing an event you could see that it’s something he enjoyed. He would have given immensely to the art of culture not only in the area of MCing but in the area of documentation as well, and you know, unfortunately, Faro would have served in the era when MCs were hardly being paid, and so he would have done most of this work free of cost and as I said, he would have done it from his heart,” he said.

The minister registered his gratitude to Mr. Davis for his contributions to the Nevis community and the Department of Community Development.

“We want to thank him for the immense contribution he would have made to culture on the island of Nevis, not only in terms of MCing but in terms of the development of the arts over the years.

“Being with the cultural practitioners, encouraging them, documenting what they do, and we are so delighted that he would have made such a contribution, and of course after he would have come to the Department of Community Development, he would have brought his MCing and organisation skills there as well.

“The events that we normally have for community development he would be an integral part of them. We normally have the “Miracle on Main Street” in Charlestown annually; he would have been the MC for that event. Any other event that the department is having he is there MCing.

In his capacity as Minister responsible for the Department of Community Development, Minister Evelyn used the opportunity to convey his condolences to Mr. Davis’ bereaved family.

“[I] would like to extend heartfelt condolences to the surviving family. Your loss is our loss, and we want to say, we hope that God will keep you in this very difficult time, and rest assured that the contributions of your relative will always live on in our minds,” he said. 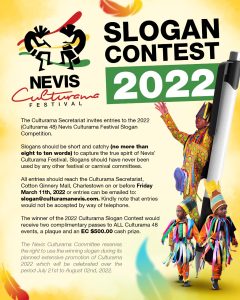 As the official countdown to the “Caribbean’s Greatest Summer Lime” begins, the Nevis Culturama Festival has launched a slogan contest for Culturama 48. 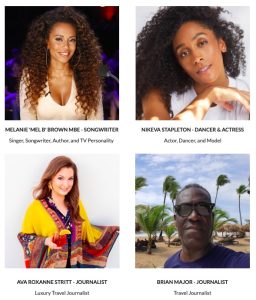 The following is a release from the Nevis Tourism Authority regarding the announcement of its Tourism Ambassadors for 2022.