New million dollar ultra modern cafeteria at the Charlestown Primary School moments before the facility was officially handed over on April 25, 2012
NIA CHARLESTOWN NEVIS (APRIL 27, 2012) — The Charlestown Primary School (CPS) has now been outfitted with an ultra modern million dollar cafeteria, thanks to the Nevis Island Administration (NIA) and a group of civic minded citizens called  the Private Initiative for School Lunches headed by Mr. James Gaskell and Mr. Hastings Daniel. The facility was officially handed over to the school during its 20th anniversary celebrations on April 25th, 2012.

Area Representative Hon. Robelto Hector in his remarks at the official ceremony on the school’s grounds, referred to the cafeteria as one that would bring much benefit to the island’s children. He pledged his continued support to ensure that the school meals programme already in other primary schools would be successful there.

“Let me as representative for the area, offer special thanks to Mr. Gaskell and Mr. Daniel for their hard work in bringing to this school, this parish a structure and a programme that will bring tremendous benefits to our children. It is my wish that you both continue with the vision and steadfastness that you have both employed up to this point. 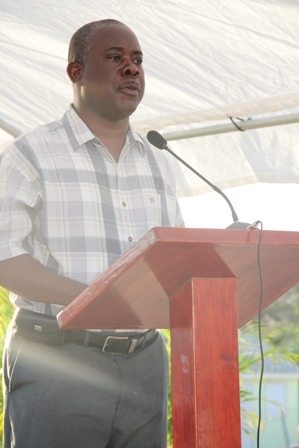 “I offer my public pledge of support to this building and project and my intention to make sure it remains a success,” he said.

Mr. Hector, who is also responsible for Agriculture in the NIA, recalled his earlier comments at the launch of the school meals programme at the St. Thomas Primary School some years ago that there had to be a great linkage between the agricultural programme and the National Dietary Guidelines.

“Today, I want to reiterate the point that our farmers must produce with this programme in mind. They ought to make every effort to complement our education initiatives aimed at achieving healthy students. We must not forget that the primary assumption of any school feeding programme, in that education and learning depends on good nutrition,” he said.

The Minister also added that the handing over of the cafeteria should also be seen in conjunction with the National Food Policy and the food based dietary guidelines launched by the Ministry of Health in September 2010, as one which could improve the general health of the Federation’s population.

“By starting with our primary schools, it is a great step towards preventing undernourishment in our society. Taking this to its logical conclusion, we are indeed making a conscious effort to secure our nation’s health and ensure there is a decrease in the overall disability and death within one generation. 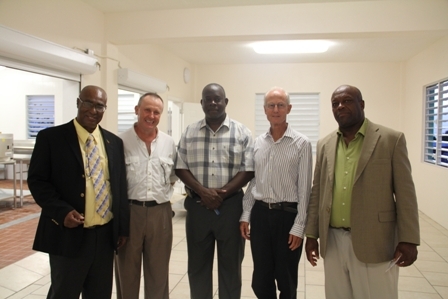 “Our Chief Medical Officer has asked that we be mindful of what he describes as the twin towers of death in St. Kitts/Nevis – high blood pressure, diabetes and cancer. More importantly through our school feeding programme we can aim to decrease the great cost associated with health related programmes,” he said.

Meantime, in an overview of the project delivered by Director of Projects in the Ministry of Communication and Works Mr. Denzil Stanley, it was disclosed that the NIA expended almost $1.5milion constructing the 120ft x 66ft structure while an additional; $500,000 was spent on the procurement of appliances and equipment for use in the cafeteria [by Mr. Gaskell and Mr. Daniel].

He further stated that the CPS now had the most modern school’s cafeteria among the schools that currently run the hot lunch programme and urged those who used the facility to care for it. 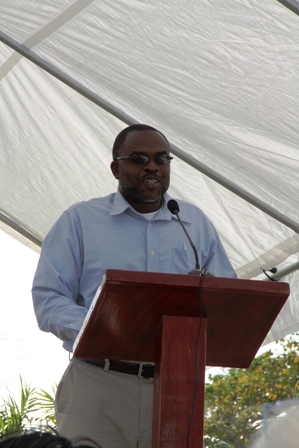 “With such an investment, it is only fair that the school, both staff and students alike, should take good care of it and ensure that it is put to effective use. Only so can the goals that were set be realised,” he said.

According to Mr. Stanley, the agreement for the construction was signed between the NIA and the contractor Mr. Eric Stapleton in October 2010, actual work commenced soon after and continued nonstop through to completion in July 2011.

“Mr. Stapleton’s mandate was to construct this building complete with a kitchen or food preparation area, a large eating area, an office space, a change room, space for a walk in chiller and freezer and space for storage or office on the lower floor,” he said.

Mr. Stanley further stated that throughout construction, the Project Management Unit provided a continued presence and was on hand to clarify any issues, guide the contractor along whenever it became necessary.

However, he described the work relationship as mutual and respectful with both the contractor and the management team learning from each other.

“The contractor Mr. Stapleton worked diligently and professionally throughout the project and the quality of work is evidenced here today,” he said.