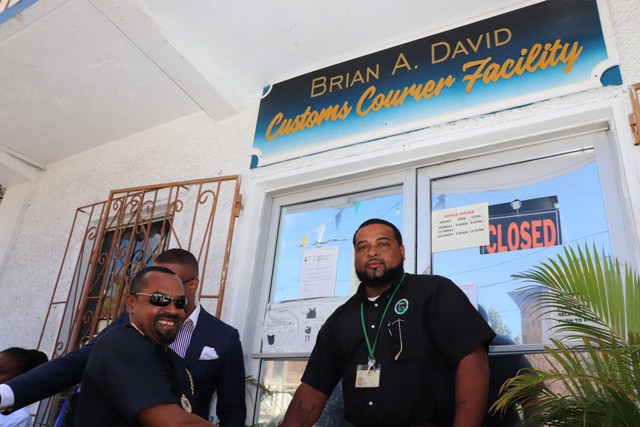 Hon. Mark Brantley, Premier of Nevis, and Mr. Sheldon David, the son of the late Brian Anthony David being congratulated by Mr. Cynric Carey, Deputy Comptroller of the Customs and Excise Department on Nevis moments after the ribbon cutting and unveiling of the new name of the Customs Courier Facility in Charlestown on October 25, 2018

NIA CHARLESTOWN NEVIS (October 26, 2018) — The Customs and Excise Department on Nevis posthumously honoured one of its stalwarts for his unwavering service to the department. The Customs facility in Charlestown was renamed the Brian A. David Customs Courier Facility, at a renaming ceremony on October 25, 2018.

Hon. Mark Brantley, Premier of Nevis and Minister of Finance, who cut the ribbon and unveiled the name with Mr. David’s son Sheldon David, described the initiative which forms part of the St. Kitts and Nevis Customs and Excise Department’s 60th anniversary celebrations, as a momentous one.

“So to put his name on this innovation, I believe is of significance to our island… I want to thank those in Customs who made this decision. I want to thank the leadership of Customs who are here now, and I want to say this sends a very clear message to our populace. Let us continue to do the best that we can,” he said.

The Premier noted that naming the facility after a fellow Nevisian, and one who had a marked human spirit sends a profound message to the community.

“We honour a Customs officer. We honour a man from Hanley’s Road. We honour someone who is one of our own, and I believe that it sends a very important message out to the community that if we do what we do and we do it to the best of our ability, that others are looking on and others in due time, will honour us for doing a good job.

Mr. Brantley, who is related to Mr. David of blessed memory, described him as one known by everyone to have a ready smile or laugh and was a gem of a human being.

He added that even after his retirement from the Customs Department, Mr. David continued to have an amazing human spirit which characterised his life in and out of the public service.

“I think we all knew him. We all loved him and as the head of the Nevis Island Administration I am very pleased today to be able to be a part of this very simple but significant ceremony,” he said.

Among those present at the ceremony were Hon. Eric Evelyn; Hon. Spencer Brand; Mr. Colin Dore, Permanent Secretary in the Ministry of Finance; Mr. Kennedy DeSilva, Acting Comptroller of Customs; family members of the late Mr. David and senior staff at the Customs Department in St. Kitts and in Nevis