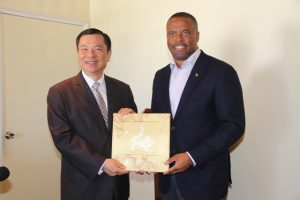 Hon. Mark Brantley, Deputy Premier of Nevis and Minister of Health, believes that data-driven decision making is the way forward for the Nevis Island Administration (NIA).

NIA CHARLESTOWN NEVIS (June 01, 2017) — The Nevis Island Administration (NIA) received the third instalment from an EC$9 million the Sugar Industry Diversification Fund (SIDF) commitment to the $18million Alexandra Hospital Expansion Project.
Dr. Robertine Chaderton, Chairperson of the SIDF Board of Counsellors handed over the cheque to Premier of Nevis and Minister of Finance Hon. Vance Amory, at the project’s ground breaking ceremony on May 31, 2017.
Two previous instalments from the Fund were used to pay for the building’s steel frame. The third instalment, however, will be used to mobilize contractors to commence construction.
END_OF_DOCUMENT_TOKEN_TO_BE_REPLACED
NIA CHARLESTOWN NEVIS (APRIL 21, 2017) — The following is a statement from the Ministry of Health in the Nevis Island Administration (NIA) regarding ongoing works at the Alexandra Hospital.
The Ministry of Health, Nevis Island Administration, wishes to inform the general public that surgical procedures resumed at the Alexandra Hospital on 21st April, 2017 after a brief interruption on 20th April, 2017.
The Ministry of Health extends sincere apologies for the inconvenience caused. The brief interruption in service was due to the relocation of the Operating Theatre.
The Operating Theatre has been relocated to the area formerly known as the old X-Ray Department. This is part of ongoing works designed to expand the service areas of the hospital.
END_OF_DOCUMENT_TOKEN_TO_BE_REPLACED
NIA CHARLESTOWN NEVIS (March 16, 2017) — Service at the Outpatient Department at the Alexandra Hospital will be enhanced, thanks to the donation of a haemoglobin analyser and a white blood cell analyser, from the membership of the Seventh Day Adventist Church (SDA) in Charlestown.
Mr. Stanton Adams, Seventh Day Church Senior Pastor and Island Coordinator presented the equipment to Hospital Administrator Gary Pemberton, at the hospital on March 15, 2017.  He said the gesture is part of the church’s outreach programme “Helping Humanity”, a mandate of the world faith-based organisation, part of whose teachings and philosophy is based on wellness and health.
He expressed hope that the gift would beneficial to the hospital’s staff as they dispense health care to the community.
In response, Pemberton thanked the church membership for the timely and significant contribution to the hospital. He said the equipment would help to increase efficiency at the Outpatient Department.
END_OF_DOCUMENT_TOKEN_TO_BE_REPLACED 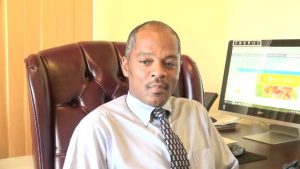 NIA CHARLESTOWN NEVIS (January 26, 2017) — The Alexandra Hospital, the main health facility on Nevis, will move closer to offering optimal service, when it begins issuing computerised Health Information cards from January 30, 2017.
Hospital Administrator Gary Pemberton told the Department of Information on January 25, 2017, that the cards will make way for smoother operation for persons accessing services at the hospital, easier access to medical records for the facility’s personnel and subsequently lessen the patients’ waiting time. Persons are required to present a government-issued identification when seeking a health information card.
“The aim of this project is to improve the quality of service at the hospital and to reduce patients’ waiting time. The doctors would be able to access their information quicker because…at the click of a button, the doctor would be able to look at the information on the computer,” he said.
Pemberton explained that plans to computerise the patients’ medical records began two years ago. However, he stated that it would take some time before the entire process is completed.
The hospital administrator urged clients to be patient as it is not expected to be a flawless operation in the early stages of implementation.
“We are craving the support of the general public and their cooperation as well, as we implement this new phase. We will have some challenges but we are asking you to bear with us…
“Once you would have the card, it doesn’t mean that everything will just flow smoothly. It will be an ongoing process. We will have some challenges but as we go along we will try and see how we can work on these challenges to ensure that we get a good system at the Alexandra Hospital,” he said. 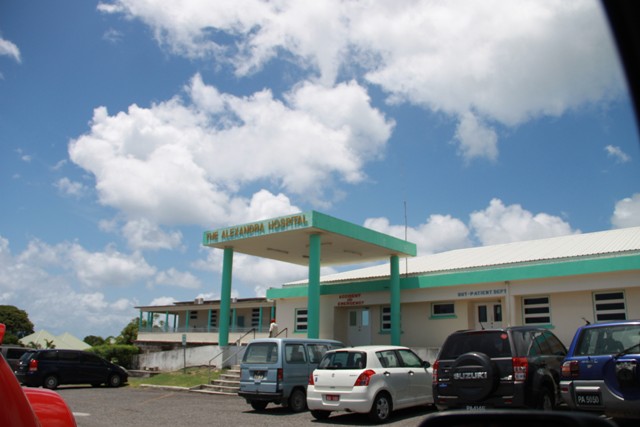 Pemberton explained, that having a card does not mean that all of a patient’s medical records would be automatically transferred to the computer system. Any information regarding medical services accessed after January 30, 2017 will be entered into the system.

However, the information in the existing medical records, filed in ledgers and forms, would have to be inputted into the computerised system. He said they planned to do so with information dating back to 2016.
The transition process will continue for three to four years until the system becomes fully computerised.