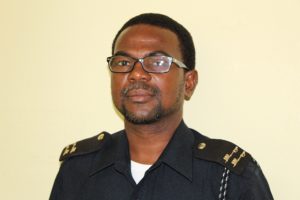 Mr. Roger Fyfield, Assistant Comptroller in the St. Kitts and Nevis Customs and Excise Department is seeking to bring a clearer understanding of procedures necessary for a smoother experience for members of the public who have to deal with the department.

NIA CHARLESTOWN NEVIS (January 30, 2017) — The Customs and Excise Department on Nevis, honoured six former staff members at the Long Point Port on January 26, 2017, for their outstanding service, which paved the way for the new generation of customs officers.
Vernon Evelyn, Stephen Jones, Denzil “Chip” Moven, Sévil Hanley, Oriel Hanley and Lester Liburd were lauded as the department joined counterparts throughout the world in celebration of International Customs Day, designated by the World Customs Organisation.
Deputy Comptroller of Customs Cynric Carey thanked the honourees for their years of dedicated service and commitment to the department and for the role they played in imparting valuable knowledge to the younger officers, including himself.
END_OF_DOCUMENT_TOKEN_TO_BE_REPLACED
NIA CHARLESTOWN NEVIS (December 09, 2016) — Roger Fyfield, Assistant Comptroller at the Customs and Exercise Department on Nevis, is asking the public to adhere to the security instructions in place at the Long Point Port over the Christmas season.
The senior Customs officer told the Department of Information on December 09, 2016, that the added security measures will assist the operations at the department during the usually busy season.
He explained that persons would not be allowed to enter the warehouse until their cargo is located by a Port official. A tent would be erected at the front of the warehouse for use as a waiting area for customers until they are called.
In cases where there is no proper authorisation, Fyfield stressed that the cargo would not be released to anyone other than the importer. Importer/consignees, are also required to present valid government-issued identification to the Customs officer, before the clearing process begins.
END_OF_DOCUMENT_TOKEN_TO_BE_REPLACED

NIA CHARLESTOWN NEVIS (JANUARY 16, 2015) — Senior officers of the Customs and Exercise Department on Nevis met with Premier and Minister of Finance Hon. Vance Amory and Permanent Secretary in the Ministry of Finance Colin Dore for a meeting ahead of the budget preparation for 2016. The session was held at the Ministry’s conference room on June 16, 2015.

According to Assistant Comptroller Shane Hanley, the meeting was called to provide a forum for the Ministry of Finance to participate more in the department’s planning strategy, to solicit support from the Ministry of Finance for resource requirements, to encourage transparency between both entities and to highlight the department’s deliverables for 2015.

He outlined the matters that were discussed, among them the strategic objectives of the Customs and Excise Department, Customs Risk Management Policy, Voluntary Compliance, Risk Management Implementation Plan 2015 and a Divisional Work Plan.