The following is an announcement from the Environmental Health Services Division in the Ministry of Health on Nevis, regarding Food Handlers Clinics to be held in September.

The following is an announcement from the Environmental Health Services Division in the Nevis Island Administration (NIA) regarding a schedule for Food Handler’s Clinics.

NIA CHARLESTOWN NEVIS (MAY 02, 2017) — The following is an announcement from the Ministry of Health regarding call for Medical University of the Americas (MUA)/ Nevis Island Administration (NIA) 2017-2018 scholarships.
The MUA and the NIA announces a Call for Scholarships for the period 2017-2018.
Two MUA/NIA Scholarships will be awarded towards the pursuit of undergraduate studies which lead to a degree at an accredited higher learning institution.
Preference will be given to qualifying schools within the Caribbean region including the University of the West Indies and the University of Technology.
END_OF_DOCUMENT_TOKEN_TO_BE_REPLACED 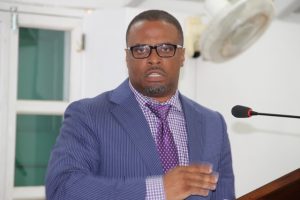 NIA CHARLESTOWN NEVIS (December 19, 2016) — The Nevis Island Administration (NIA) plans to continue expanding the services offered at the Alexandra Hospital once work, which is expected to commence on the physical plant in 2017, is completed.
Deputy Premier of Nevis and Minister of Health Hon. Mark Brantley said at a recent sitting of the Nevis Island Assembly, that the steel frame for the hospital’s expansion is expected to be installed in January 2017 followed by a construction period of 18 to 24 months.
The Health Minister urged the public to be tolerant with temporary measures including relocations and diversions that will be taken to facilitate works.
“There would have to be a temporary location of services including the operating theatre, the main kitchen as well as supporting kitchens and we will have to block off certain areas, relocate certain wards and we are asking for the general public’s support in the circumstances,” he said.
However, Mr. Brantley announced that work would not only commence at the Alexandra Hospital but also at health centres.
END_OF_DOCUMENT_TOKEN_TO_BE_REPLACED
NIA CHARLESTOWN NEVIS (October 28, 2016) — The Nevis Island Administration (NIA) and the High Command of the Royal St. Christopher and Nevis Police Force in conjunction with the Federal Government are taking steps to redeploy police officers stationed at the Newcastle Police Station to neighbouring police districts by November 15, 2016, as a temporary measure.
Hon. Vance Amory, Premier of Nevis and Minister responsible for Security made the announcement on October 27, 2016, following a Cabinet meeting with the Royal St. Christopher and Nevis High Command at his office at Pinney’s.
He said the police station has become unfit for humans to work in and it has become necessary to safeguard them from further exposure to what he termed as unhealthy conditions there.
Mr. Amory stated that Hon. Alexis Jeffers, Minister responsible for Communication and Works on Nevis and the Area Representative for the Parish of St. James’, will spearhead the process of demolishing the building, finding a suitable plan and the relevant financing to construct a new police station in that area.
END_OF_DOCUMENT_TOKEN_TO_BE_REPLACED