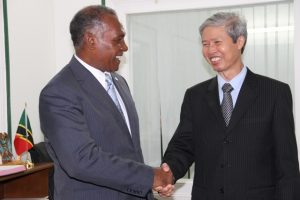 NIA CHARLESTOWN NEVIS (November 25, 2015) — The first Vietnam Ambassador to the Federation of St. Kitts and Nevis His Excellency Mr. Duong Minh paid a courtesy call on Premier of Nevis Hon. Vance Amory. They met at the Nevis Island Administration at the Premier’s Bath Hotel office on November 24, 2015. The Ambassador was accompanied by Minister Counsellor Mr. Duong Hai Hung.

In brief remarks after their meeting, Mr. Amory described the meeting as fruitful. He said they exchanged ideas on how St. Kitts and Nevis could benefit from Vietnam and how the countries could mutually benefit and strengthen their relations.

According to the Premier, they discussed areas of cooperation in tourism, technology development, education, agriculture and opportunities for investment in business.

Meantime, Ambassador Minh who had presented his credentials to Governor General His Excellency S.W. Tapley Seaton QC one day before in Basseterre, expressed satisfaction with his discussions with Premier Amory. He expressed gratitude, on behalf of the Vietnamese people, for the cooperation.