NIA CHARLESTOWN NEVIS (AUGUST 09, 2017) — Plans are afoot for the observance of the Nevis Electricity Company Limited’s (NEVLEC) 17th anniversary on September 01, 2017. The milestone will be celebrated with a week of activities from August 27th to September 2nd, 2017, with the theme, “NEVLEC: 17 years of perseverance and growing stronger with planned advancement”.
Paulette Hanley, Administrative Assistant at NEVLEC and Chairman of its 17th Anniversary Planning Committee listed the events, the first of which is a service of thanksgiving. It will be held at the St. James Anglican Church on August 2nd from 8 am to 10 a.m.
During the service, the Company will make a donation to the church and Hon. Alexis Jeffers, Minister responsible for Public Utilities will deliver remarks.
The highlight of the week of activities is planned for Monday, August 28th, 2017, when the new Wӓrtsilӓ 3.85 engine will be commissioned at the Prospect Power Plant. The ceremony will be held in the parking lot at 10 a.m.
On Tuesday August 29th, 2017, two donations will be made to the island’s seniors at the Flamboyant Nursing Home in Charlestown and the St. Georges and St. Johns Senior Citizens Home in Gingerland from 10 a.m.
Later that day, the company’s management staff will be hosted on the “Let’s Talk” programme on VON Radio at 8 p.m.
END_OF_DOCUMENT_TOKEN_TO_BE_REPLACED
NIA CHARLESTOWN NEVIS (JULY 31, 2017) — Hon. Alexis Jeffers, Minister of Public Utilities in the Nevis Island Administration (NIA), told a group of technicians at the Nevis Electricity Company Limited (NEVLEC) that the knowledge they would gain at the training session by a senior Wӓrtsilӓ  instructor, would help to develop them in the workplace.
The minister, was at the time delivering remarks on the first day of five days of training at the Prospect Power Plant’s meeting room on July 31, 2017. It is being conducted by Mr. Matti Kakko, Senior Instructor Technical Service Turbochargers Wӓrtsilӓ North America Inc.
“Knowledge is important but what you do with the knowledge is also important. I believe that the END_OF_DOCUMENT_TOKEN_TO_BE_REPLACED
NIA CHARLESTOWN NEVIS (JUNE 27, 2017) — Installation of the new 3.85 megawatt-Wӓrtsilӓ generator at the Prospect Power Plant has commenced. The US$5 million engine arrived on Nevis on June 24, 2017. It was shipped by the manufacturers in Finland on April 20, 2017.
Hon. Alexis Jeffers, Minister responsible for Public Utilities in the Nevis Island Administration (NIA) made the announcement on June 26, 2017, in a further update on the status of the installation process for the new engine
Some months ago, the Nevis Electricity Company Limited (NEVLEC) with support from the NIA, purchased the engine in a bid to provide a more reliable supply of energy on the island.
END_OF_DOCUMENT_TOKEN_TO_BE_REPLACED 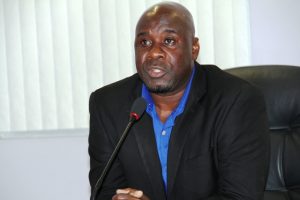 NIA CHARLESTOWN Nevis (August 29, 2016) — The Nevis Electricity Company Limited (NEVLEC) will commission a new generator at its plant in Prospect shortly, in its quest to stabilise the island’s power supply.
Word of the new addition came from Minister responsible for Public Utilities Hon. Alexis Jeffers when he delivered remarks at the Franklyn Browne Community Centre in Newcastle on August 25, 2016, at the first in a series of town hall meetings hosted by the Nevis Island Administration (NIA).
“I can say to you this evening that we have had the approval of the Cabinet of the Nevis Island Administration to purchase a 2.5 megawatt generator for NEVLEC to ensure that we have some stability there.
“As a matter of fact, I can also say to you, within the next 30 days that generator should be here to ensure that we have the stability that we want to go into our next tourist season, into Christmas and beyond and also the development that we expect here on the island of Nevis. We want to ensure that we have the capacity to provide power in a stable manner and in an efficient manner,” he said.
END_OF_DOCUMENT_TOKEN_TO_BE_REPLACED