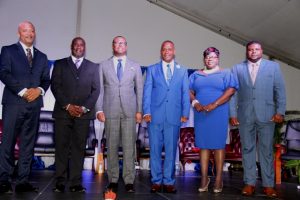 The Nevis Island Administration (NIA), led by Premier of Nevis Hon. Mark Anthony Graham Brantley, was inaugurated at a ceremony at the Elquemedo T. Willett Park in Charlestown on December 24, 2017. 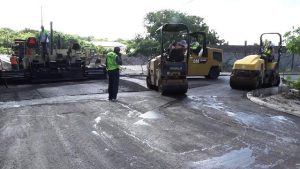 The Nevis Island Administration (NIA), is continuing its trust to ensure the continued upgrade of the road network on Nevis. The Braziers Road Improvement Project, about 12,000 feet of road way, is the most recent road initiative to be completed after 10 months of construction.

NIA CHARLESTOWN NEVIS (JULY 04, 2017) – A youth group from the New Life Baptist Church in Tortola, got some sound advice from Hon. Hazel Brandy-Williams, Junior Minister responsible for Youth in the Nevis Island Administration (NIA), when they visited Nevis for one day on July 03, 2017.
The Minister welcomed the group to Nevis moments after disembarking the ferry at the Charlestown Pier.  She told them that as young people, the world is at their feet and they should do whatever they wanted, once they have the mind, passion and by the grace of God they would succeed.
“I want you to continue being youthful. Continue to do what you do best as young people. Continue to stay focused. Continue to walk with God,” she said.
END_OF_DOCUMENT_TOKEN_TO_BE_REPLACED
NIA CHARLESTOWN NEVIS (JUNE 14, 2017) –– Investor confidence on Nevis remains high. Hon. Troy Liburd, Junior Minister in the Ministry of Communication and Works in the Nevis Island Administration (NIA), says the evidence lies in the number of ongoing projects by the private sector.
The Minister’s comment came on June 13, 2017, after a tour of five properties – Tower Hill, Nevisian Sunset, Paradise Beach Expansion, Four Seasons Resort and the Four Seasons Resort Estates – all engaged in END_OF_DOCUMENT_TOKEN_TO_BE_REPLACED 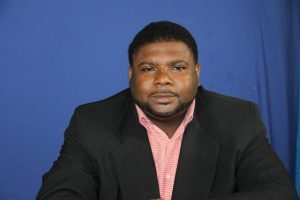 NIA CHARLESTOWN NEVIS (OCTOBER 10, 2016) — The following is a statement by Hon. Troy Liburd, Minister of Communications, Works and Public Utilities in the Nevis Island Administration (NIA) delivered on October 10, 2016, on the interruptions in the water service.

Over the past two weeks some areas on the island of Nevis have experienced water outages. The Nevis Water Department, as is their custom, put out notices via various media to alert consumers of these outages. They have, however, persisted longer than was initially expected and has caused discomfort to a wide cross section of consumers.

I thought it necessary then, to make this statement, to inform the general public of the difficulties and also of what is being done to ensure that an acceptable level of service is given to customers while we work towards returning the water system to normalcy.

The situation developed as a result of a failure of a submersible pump that brought water from the BEAD (Bedrock Exploration and Development Technologies) Maddens Heights well to the Water Department system. This failure occurred on Sunday 25th September.

Several attempts were made to trouble shoot the problem and to restart this pump. All such efforts failed and the pump had to be eventually pulled from the well. END_OF_DOCUMENT_TOKEN_TO_BE_REPLACED