NIA CHARLESTOWN NEVIS (July 14, 2016) — Major works in the Hanley’s Road Rehabilitation Project are slated for completion by the end of July. Up to the end of June, 2016, the project remains on budget. The multi-million dollar venture commenced on March 18, 2015, under the supervision of the Public Works Department (PWD).
Hon. Troy Liburd, Junior Minister of Communication and Works on Nevis, with special responsibilities for Works and Public Utilities, Posts, Physical Planning, Natural Resources and Environment, released the information while presenting a status report of the project at a sitting of the Nevis Island Assembly on July 12, 2016.
“As of the end of June, the total expenditure on this project stood at $5,427, 134.89 hard cost. That is actually spent by the Nevis Island Administration (NIA). Factoring in soft costs, the total cost of the project as of the end of June stands at $6.5million…
“Major works on Hanley’s Road should be completed by the end of this month,” he said.
END_OF_DOCUMENT_TOKEN_TO_BE_REPLACED
NIA CHARLESTOWN NEVIS (October 10, 2015) — Junior Minister in the Ministry of Communications, Works and Public Utilities Hon. Troy Liburd, says he is satisfied with the progress of the $8 million Nevis Island Administration (NIA)-funded Hanley’s Road Rehabilitation Project.
Mr. Liburd made the comment, when the Department of Information visited the project on October 09, 2015. Work commenced on the project earlier this year. The 12-month-long project executed by the Public Works Department, is expected to conclude in the first quarter of 2016.
“I would say that the project has proceeded very well. It’s on schedule. It’s also on budget so far and hopefully, at the end of the project we would have spent about $8 million here.
END_OF_DOCUMENT_TOKEN_TO_BE_REPLACED

END_OF_DOCUMENT_TOKEN_TO_BE_REPLACED 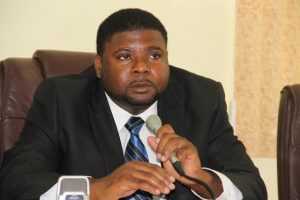 NIA CHARLESTOWN NEVIS (June 25, 2014) — Junior Minister in the Ministry of Communication, Works,  and Public Utilities on Nevis Hon. Troy Liburd issued a call to the people of Nevis to take care of their environment and conserve one of the island’s precious commodities – water.
Mr. Liburd was moved to do so at a handing over ceremony for grant assistance from the St. Kitts and Nevis Sugar Industry Diversification Foundation (SIDF) on June 24, 2014, for an EC$29.6million Nevis Water Supply Enhancement Project, jointly funded by the Caribbean Development Bank and the Nevis Island Administration (NIA) at the Ministry of Finance conference room.
“I want to take the opportunity to appeal to our residents on island to take care of your environment, to conserve water…Nevis as we know is 36 sq. miles and we have to protect the little resources that we have here. We do not have any glaciers or perennial rivers and lakes that provide water to us. Most of our water on island is ground water.
END_OF_DOCUMENT_TOKEN_TO_BE_REPLACED 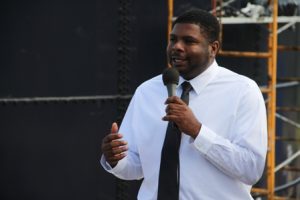 NIA CHARLESTOWN NEVIS (January 30, 2014) –Junior Minister responsible for Public Utilities on Nevis Hon. Troy Liburd reassured the public that work was ongoing, though slowly, on the Caribbean Development Bank (CDB)-funded Water Enhancement Project.
During a field visit to the Camps worksite on January 28, 2014, Mr. Liburd accompanied by Permanent Secretary Ernie Stapleton and Project Coordinator Brian Kennedy, told the Department of Information it was important for the public to be appraised of the ongoing work on the project.
“We’re here this morning because we want to give the general public an idea of what has been happening so far. Behind me you see some gentlemen erecting what is going to be a 300,000-gallon reservoir and we wanted the general public to know that work has been going on the water project. We’ve heard a lot of talk about the water project but not much people have seen what has been going on.
END_OF_DOCUMENT_TOKEN_TO_BE_REPLACED