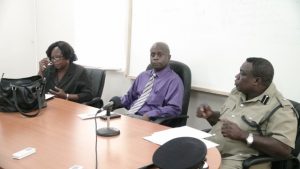 NIA CHARLESTOWN NEVIS (October 23, 2015) — Immigration officers on Nevis are now better equipped to play a more defining role in the security of the island’s entry and exit ports, following a two-day workshop to sharpen their skills.

The training was hosted by the Department of National Security in St. Kitts in collaboration with the Premier’s Ministry in the Nevis Island Administration (NIA). It concluded at the Cotton Ground Police Station’s conference room on October 22, 2015.

Facilitator, Senior Officer at the Immigration Department in the Ministry of National Security Alicia Huggins, told the Department of Information at a small ceremony on October 21, 2015, the training was designed to expose the officers to the fundamentals of fraud and imposter detection, improve the officers’ knowledge and understanding where processing of passengers was concerned, emphasise the critical role immigration is required to play in securing regional boarders and to clarify the role of an immigration officer with regards to national security.

Meantime, Superintendent Hilroy Brandy, Head of the Nevis Division of the Royal St. Christopher and Nevis Police Force, told the immigration officers that they are charged with a very critical multidisciplinary role. END_OF_DOCUMENT_TOKEN_TO_BE_REPLACED