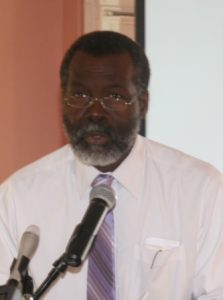 CHARLESTOWN NEVIS (June 15, 2010) — Organisation of the American States (OAS) Representative for St. Kitts and Nevis Mr. Starret Greene said he relished the opportunity to continue to work with all functionaries in St. Kitts and Nevis to ensure that technical cooperation projects and activities the OAS provided for the Federation was proportionally allocated for the benefit of citizens on both sides of the channel.

END_OF_DOCUMENT_TOKEN_TO_BE_REPLACED

CHARLESTOWN NEVIS (June 15, 2010) — Director of the Nevis Disaster Management Office Mr. Lester Blackett said it was no longer sufficient for governments to settle for disaster management strategies which spoke simply to preparation just prior to disasters or post disaster recovery efforts.