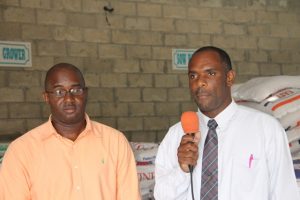 NIA CHARLESTOWN NEVIS (January 07, 2015) – Permanent Secretary in the Ministry of Finance on Nevis Colin Dore, says in spite of recent price adjustments to animal feeds at the Supply Office, the Nevis Island Administration (NIA) would find ways to share the increased cost based on their cost of production.

Dore revealed the NIA’s plans to assist the animal farmers, when he spoke to the Department of Information on January 06, 2015 at Pinneys. He spoke on the heels of increased prices on animal feed which were effected from January 01, 2015.