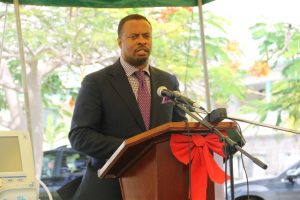 NIA CHARLESTOWN NEVIS (December 22, 2014) — Deputy Premier and Minister of Health on Nevis Hon. Mark Brantley, thanked the St. Christopher and Nevis Social Security Board for a donation to the Ministry of Health for the Alexandra Hospital. He described it as a Christmas gift to the people of Nevis.

Mr. Brantley made the comment as he received the gifts from Prime Minister and Minister for Social Security the Rt. Hon. Dr. Denzil Douglas. The handing over ceremony was held at the Alexandra Hospital’s grounds on December 19, 2014.