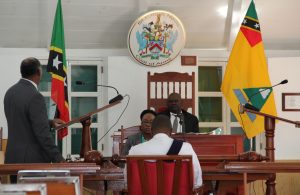 NIA CHARLESTOWN NEVIS (DECEMBER 04, 2015) — In what can be described as its final sitting for 2015, the Nevis Island Assembly will convene at Hamilton House at 10 a.m. on December 08, 2015. At the sitting, Premier of Nevis and Minister of Finance in the Nevis island Administration (NIA) Hon. Vance Amory will present the 2016 Budget Address.

This will be followed by messages from Deputy Governor General His Honour Eustace John, and announcements by the president.

Mr. Amory will then lay on the Table the Draft Estimates 2016 which will be followed by statements by Ministers in the Nevis Island Administration and Personal Explanations will follow.