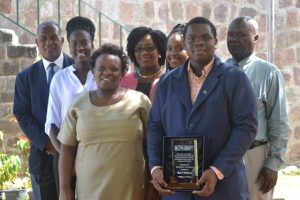 Rol-J Williams, a student of the Gingerland Secondary School who was part of the delegation from Nevis, coped the Award at the 11th Regional Youth Parliament Conference. He was honoured for his achievement by President of the Nevis Island Assembly Hon. Farrell Smithen and Premier of Nevis Hon. Vance Amory, at a brief ceremony at the Assembly grounds on August 05, 2015.