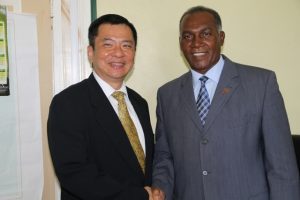 Mr Amory welcomed the Ambassador to Nevis along with his delegation of six from Taiwan.  He stated that during their discussions, they spoke about the well-established relations between Taiwan and Nevis. He also thanked the Ambassador for expressing his unremitting support to the island.

“His Excellency and myself spoke about the good relations we’ve had between his country and our country and also specific programmes which we have developed over the years. Primarily, we looked at agricultural development…We’ve talked of the educational system which has been given… Scholarships, which have been offered to our people for training in Taiwan,” Mr. Amory said.