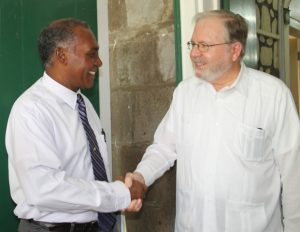 NIA CHARLESTOWN NEVIS (February 13, 2015) — Premier of Nevis Hon. Vance Amory told a visiting Organisation of American States Electoral Observer Mission it had an interesting role to play in the general elections of St. Kitts and Nevis, carded for Monday, February 16, 2015.

Mr. Amory’s comment came at the end of a meeting with the four-member Mission at his Bath Plain office on February 13, 2015. He said he told the team of some of the issues at stake, among them, preparations made, concerns with respect to the elections being held and the issues which led to the Privy Council’s decision with regard to the boundary changes. END_OF_DOCUMENT_TOKEN_TO_BE_REPLACED