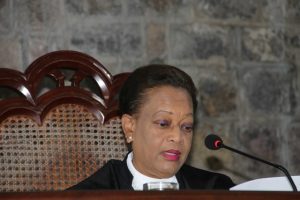 NIA CHARLESTOWN NEVIS (September 21, 2015) — The Nevisian public witnessed the ceremonial opening of the Eastern Caribbean Supreme Court new Law Term 2015-2016 at a Special Sitting of the Charlestown High Court and a commemorative service at Taylor’s Memorial Holiness Church on September 17, 2015.

Resident Judge on Nevis Justice Lorraine Williams, in her opening remarks spoke of the strains of law and order by mandating that the court authority should be respected by all so in order to perform its role of upholding an efficient justice system. She referred to some of the challenges faced by the judiciary but advocated that members support each other in strength.