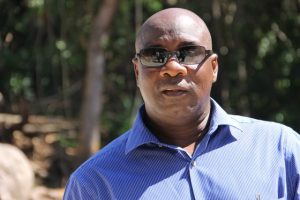 NIA CHARLESTOWN NEVIS (FEBRUARY 03, 2016) — Chairman of the Nevis Housing and Land Development Corporation (NHLDC) Hon. Alexis Jeffers expressed satisfaction with the construction of a bridge at Colquhouns Estate which is earmarked for completion later this month.

Mr. Jeffers who is also the Minister responsible for Housing and Lands in the Nevis Island Administration (NIA) told the Department of Information recently, that the project, which would grant ease of access to lands in the area, is a collaborative one between the NIA and the private land developers.

The Minister also explained that the project is a critical one for the area. He said the ghaut which carries a large volume of water during inclement weather goes as far as Fort Ashby and empties into the ocean.