(CHARLESTOWN,NEVIS–MONDAY, AUGUST 16TH, 2010) Developers for the Charlestown Harbour Shopping Village Project, Namdar Brothers Realty Ltd. have confirmed their commitment to redevelop the Charlestown Waterfront. Premier of Nevis Hon. Joseph Parry announced in an interview with the Department of Information on Monday Morning, that according to a letter received from the St. Kitts based developers, the ground breaking for the project is earmarked for Tuesday, January 18th 2011.

END_OF_DOCUMENT_TOKEN_TO_BE_REPLACED

Hon. Joseph Parry
(CHARLESTOWN,NEVIS–MONDAY,AUGUST 16TH, 2010)  Premier and Minister of Finance the Hon. Joseph Parry, will be host to the fourth Consultation on the Erconomy of Nevis at Occasions Conference Centre, Pinneys Road on Wednesday October 6th, 2010 under the theme “Addressing the decline in Economic Growth: The Nevis Case.”
END_OF_DOCUMENT_TOKEN_TO_BE_REPLACED 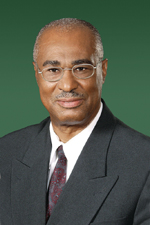