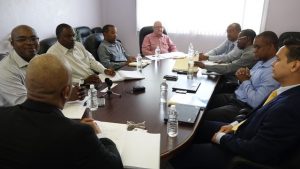 Hon. Spencer Brand, Minister responsible for Water Services on Nevis is describing a meeting with a team from the Caribbean Development Bank (CDB) as frank and fruitful. 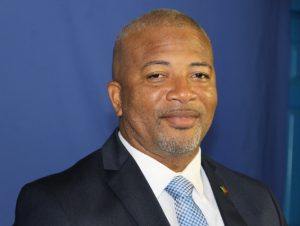 The following is an address by Hon. Spencer Brand, Minister in the Ministry of Water Services in the Nevis Island Administration (NIA) for the observance of World Water Day. The theme is “Nature for Water.”

NIA CHARLESTOWN NEVIS (APRIL 18, 2019) — Manager of the Nevis Water Department Roger Hanley, is urging consumers to be conservative in their water usage, even if the water supply has been restored. He said the system needs some time for replenishment.
Mr. Hanley told the Department of Information on April 18, 2017, two days after the electrical submersible pump at the Bedrock Exploration and Development Technologies (BEAD) Maddens Pumping station was replaced. The station which is the largest single producing well on Nevis failed last September. It caused challenges for a sustained water supply across Nevis.
END_OF_DOCUMENT_TOKEN_TO_BE_REPLACED 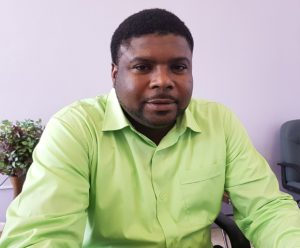 NIA CHARLESTOWN NEVIS (APRIL 11, 2017) — The Nevis Island Administration is taking the matter of persistent water disruptions seriously and is seeking to bring the situation to a speedy state of normalcy.
Hon. Troy Liburd, Junior Minister in the Ministry responsible for Public Utilities gave the assurance on April 11, 2017, when he spoke to the Department of Information. He said they have been in constant contact with Bedrock Exploration and Development Technologies (BEAD) and are working to remedy the situation which has affected consumers on the island since last year September.
“This situation with the water has been the single highest priority for the Ministry and it is a very high priority for the government. It is not something that we are taking lightly.
“Water, of course, is the most basic thing. We need water for hygiene, we can’t live without water, so it is something that we are taking very, very seriously… We have been working with the company BEAD. They are the ones who operate the well…up to this morning, I spoke with the Chief Executive Officer of BEAD and he is assuring me that we are going to have a solution to that problem shortly,” he said.
The problems stemmed from a failed pump at the Maddens Heights pumping station owned by BEAD. They had been contracted by the NIA in the past to provide a certain quantity of water. The pump which is one of two owned by the company, generates the largest amount of water on the island at 360 imperial gallons per minute.
END_OF_DOCUMENT_TOKEN_TO_BE_REPLACED 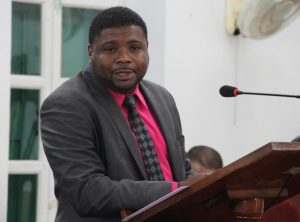 NIA CHARLESTOWN NEVIS (December 15, 2016) — The Nevis Water Department (NWD) will continue to upgrade water distribution systems on Nevis in 2017, with planned pipe upgrades in the Brown Hill area and other parts of the island.
Hon. Troy Liburd, Junior Minister in the Minister of Communications, Works and Public Utilities, said at a recent sitting of the Nevis Island Assembly that the upgrades would be done in conjunction with the Public Works Department who will be engaged at the same time in road works.
“This will coincide with works to be carried out by the Public Works Department on the Brown Hill Road Rehabilitation Project.
“They will also be fully engaged in pipe upgrades in the Shaw’s Road area and this will be in conjunction with works to be carried out on the Shaw’s Road Rehabilitation Project. These piping networks we expect them to go along Shaw’s Road up to Gore Hill, all the way up to Fountain,” he said.
In addition, the NWD hopes to bring relief to consumers in areas experiencing low or no water pressure. Mr. Liburd described the project as an ambitious but necessary one.
He explained that one of the reasons for expanding the Nevis Water Supply Enhancement Project – by expanding the transmission mains, the second phase of which will commence in 2017 – is to facilitate all the upgrades.
END_OF_DOCUMENT_TOKEN_TO_BE_REPLACED