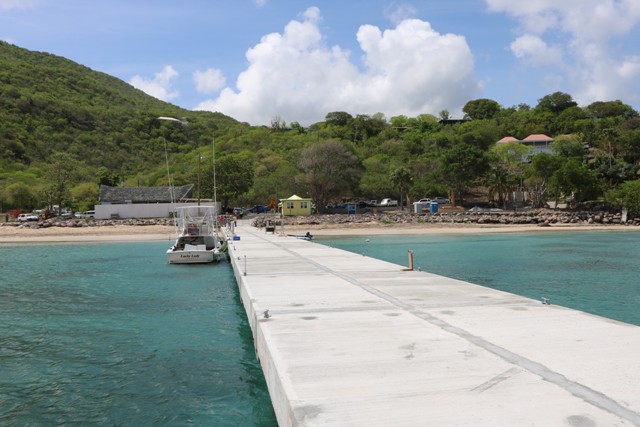 NIA CHARLESTOWN NEVIS (May 20, 2019) — For one of the longest serving water taxi operators on Nevis, the new water taxi pier at Oualie Bay is a welcome facility.

Capt. Wincent Perkins of Islander Watersports told the Department of Information on May 20, 2019, a few days after the facility was opened to facilitate boat operators plying their trade between Nevis and St. Kitts, that he was thankful for the foresight of the leadership of the Nevis Island Administration.

“For the 14 years we have been in operation this [dock] is much safer, more professional, more welcoming to the island – the first impression. So this is a much nicer dock, a much nicer facility to be at, at this present time.

“So I would like to thank the [Nevis] Island Administration, [Hon. Alexis Jeffers and Hon. Mark Brantley], for this initiative of providing this first class facility for us,” he said.

In an invited response as to the type of advice he wants to share with fellow operators at the new facility, he urged them to be professional.

“There’s not a competition out there but just do it professionally. Some people come without uniform, with uniform, no shoes. Just create a good impression of the island in terms of keeping the standards,” he stressed.

The local entrepreneur also used the opportunity to register his gratitude to the Yearwood family, proprietors of Oualie Beach Hotel and owners of the older existing pier which he and other operators were allowed to use over the past years.

He also expressed hope that the family would restore the older pier which has been affected by the passage of storms in recent years.

Mr. Perkins explained that his fleet of boats stands at seven but it will be increased shortly to 10. At present the staff compliment is about 35 to 40.  Ninety percent are from Nevis and the remaining 10 percent are foreigners.

Meantime, while he thanked members of the public for their support over the years, he urged others to utilise the facility.

As to his thoughts on the future of the water taxi service with the new pier, Mr. Perkins believes that it will continue to grow.

“It’s going to encourage a lot more people to get boats because of the facility. I would project in the next year or two we should have on board maybe another five operators,” he said.

At the end of the interview, Mr. Perkins accompanied by Mr. Raymundo Nisbett, First Mate; and Mr. Verez Dore, Second Mate, took members of the Department of Information’s staff on what could be described as a pleasant and short coastal tour as far as the Four Seasons Resort, Nevis.