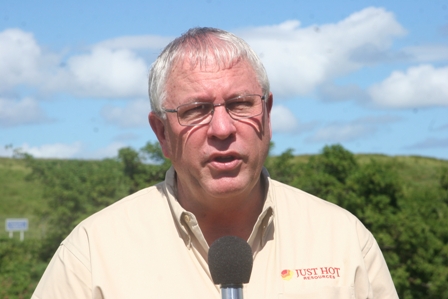 CHARLESTOWN NEVIS (November 22, 2010) — Nevisians can look forward to more job opportunities at the start of 2011, weeks after Nevis’ largest employer the Four Seasons Resort, would have already opened its doors to over 600 employees on December 15, 2010 after a two year closure.

Word of this came from President of Just Hot Resources Mr. James Hanson, a United States of America based company contracted to work on Nevis with geothermal developers West Indies Power Nevis Ltd. (WIP), from late January/early February on the site of the 10megawatt geothermal power plant at Spring Hill.

Mr. Hanson made the disclosure in an interview with the Department of Information during a recent visit to Nevis by representatives of all the companies contracted to be involved in the development of the renewable energy power plant. He also said other sectors of the community would benefit from the activities at the site.

“We plan on utilising local help, so we will be hiring people to assist with working on the rig and also to assist on the well, site. We will be using a lot of fuel, water, your trucks, a lot of services. There will be 25-30 people brought in to do the directional and the drilling project itself, so there will be money being spent in the community.

“We plan to keep everything local as much as we can…We will probably be looking initially at eight to 12 locals… Until we are able to train employees up we have four WIP employees that worked with us before and we will rely on them to help us hire additional personnel and as the construction goes on they have talked about bringing our people that we brought up over to possibly work on the construction site and they will need additional personnel as well,” he said. 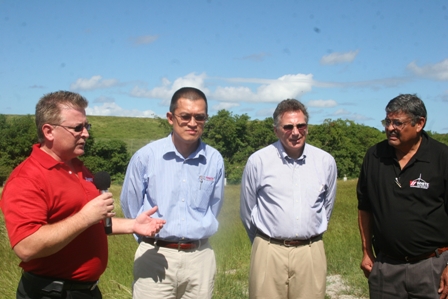 According to Mr. Hanson, in the meantime, directional staff with the relevant expertise to service and run the equipment would be brought in from the United States.

He further explained that his company already had three years experience on the island and this was his eighth visit to Nevis. He said they were responsible for the original exploratory core holes that had been constructed in Spring Hill, Upper Jessups and Hamilton.

When the company resumes work early next year, Mr. Hanson said they would drill three wells and the information gathered would be relayed to White Construction and TurboCare a subsidiary of Siemens. They would be responsible for the construction and design respectively of the geothermal power plant.

Meantime, Geothermal Programme Director of TutboCare Mr. Donald Leger said the company had been involved in the project for the past two years and looked forward to getting it started in quick time.

He said TurboCare had worked on geothermal turbines throughout the world and will design the machine for Nevis.

“We will be designing this machine to specifically match the steam conditions here on the island of Nevis and make sure that we have got the proper materials and design machine that gives the long term reliability necessary.

“We have done work on new turbines as well as overhauling turbines all over the world. TurboCare has been involved with this project with Kerry [WIP Chief Executive Officer] for about two years now and this is my second visit to Nevis,” he said.

Senior Industrial Estimator with White Construction Mr. Ruben Olivas noted that his role would be to develop the cost of the project. He explained once he received the information from the drilling to the power block equipment design team, he would take care of all the structural parts of the job and develop the budget cost for the entire project.

The Company’s Business Development/Industrial Projects Manager Mr. James Foster said he managed all the industrial development of White Construction which had been very active in the renewable energy market and it would be no different with the Nevis project.

“We are excited to be here on Nevis to build the geothermal facility,” he said.

Senior Project Engineer of Power Engineers Mr. Chun Chin, told the Department of Information that his company had partnered with White Construction on the project, He said his company a leading engineering company for geothermal power plants for the last 20 years. 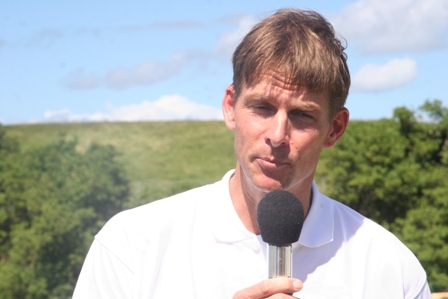 “We have built and designed power plants across the globe and we are here to help White Construction with the engineering of the plant, integrate all the major equipment, specify the equipment and help them with procurement, provide the construction drawings and everything else needed to build and also to start up the plant when it is ready,” he said.

However, West Indies Power Nevis Ltd. Subsurface Wells Manager Mr. Johan Sydow who would be the company’s expert overseeing the project was introduced. During the interview he said he had been based in Trinidad for the last 10 years and was engaged in many oil and gas drilling projects.

Notwithstanding, he said he was drawn to the WIP project in Nevis because he had found it extremely exciting.

“I found it extremely inspiring to bring 100 percent renewable energy and energy independence to some of the smaller islands and this being the first one. So I have stepped out of that [oil and gas] industry to come and help with managing what is quite a big project on this little island and it is going to be very significant to the people of Nevis.

“So to me that’s very inspiring essentially to ensure we have the right plans in place, that we are following the plans and when we get the first wells done and the results of those that we put a plan in place to manage that geothermal resource that would last the island essentially forever. I am very excited to be here,” he said.