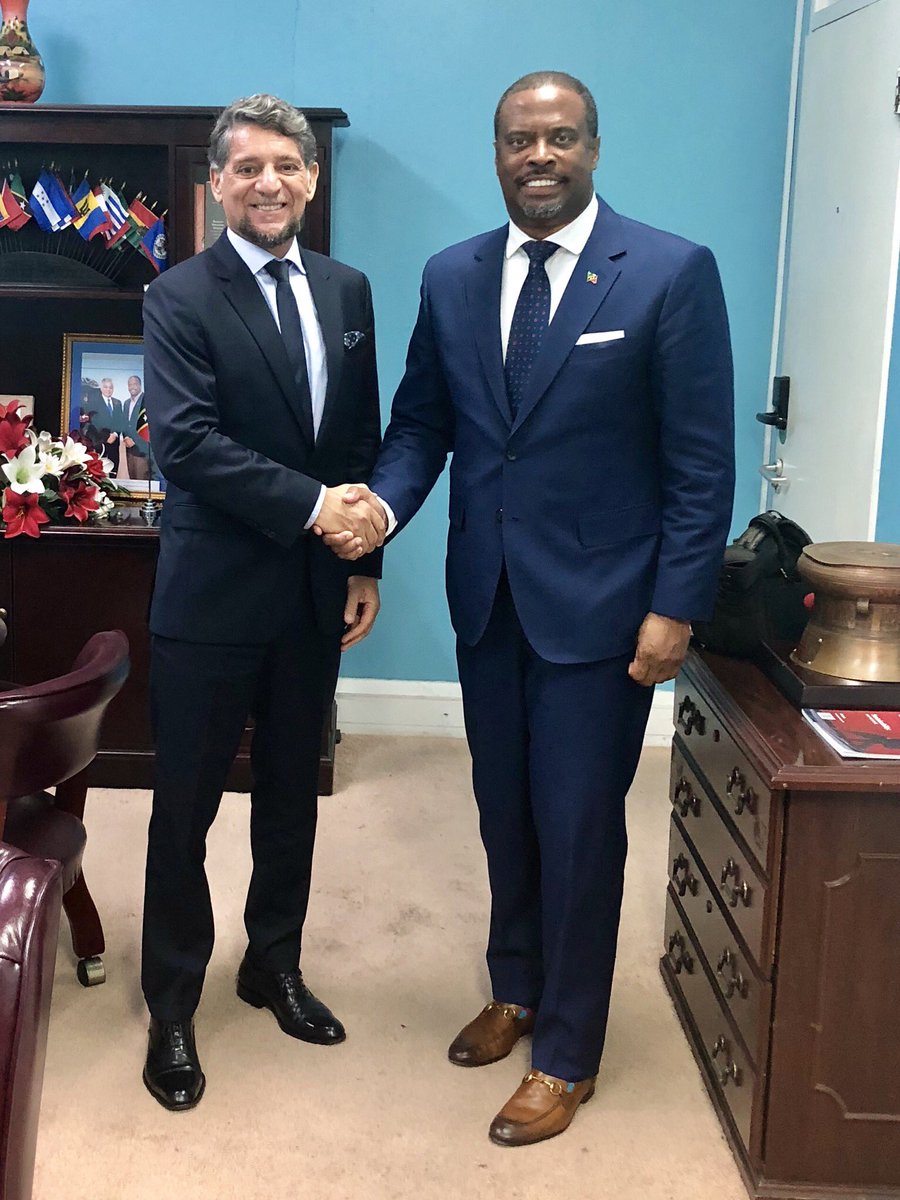 (l-r) His Excellency Gustavo Pandiani, outgoing Ambassador of the Argentine Republic to Barbados and the Organisation of Eastern Caribbean States with Hon. Mark Brantley, Foreign Affairs Minister of St. Kitts and Nevis during a visit to the federation for Independence celebrations in September 2019

NIA CHARLESTOWN NEVIS (October 26, 2020) — His Excellency Gustavo Pandiani, outgoing Ambassador of the Argentine Republic to Barbados and the Organisation of Eastern Caribbean States (OECS), has praised Hon. Mark Brantley, Foreign Affairs Minister of St. Kitts and Nevis, for his stewardship of the bilateral relationship between the two countries.

Mr. Pandiani was at the time speaking on his tenure representing his country in the English-speaking Caribbean region for the past three years. The interview with Caribbean Impact aired on October 25, 2020.

“During this tour we achieved many, many goals, and most of them were possible to achieve because of the coordination with the societies and governments of your beautiful islands in the Caribbean. Just to give you one example: I had a conversation a few days ago with the Minister of Foreign Affairs in St. Kitts and Nevis, my friend Mark Brantley, and we were trying to connect new projects of cooperation between the two countries.

The Ambassador pointed out that it was the first time an English-speaking Caribbean country was represented at such an important course.

“It was because of the leadership of Mr. Brantley, who is not only a great minister, but also a good friend of mine that we were able to achieve that goal,” he further stated.

Ambassador Pandiani and Hon. Brantley during a virtual meeting on October 20, 2020, discussed issues critical to both the South American country and the federation, including the impact of the COVID-19 pandemic.

“The pandemic is of course an obstacle for our diplomatic relations…and I think COVID is going to have a big impact on all of us, making it a little more difficult. We cannot, for example, send our experts now because flights are not available and some borders have been closed, but at the same time I think we have new opportunities because of lines of cooperation.

Mr. Brantley also had high praise for the foreign diplomat, thanking Ambassador Pandiani for his cooperation with and service to St. Kitts and Nevis.

“He has been a brother and a friend. With his guidance, the relationship between our two countries is at its most robust. He has assisted the Federation with sports, training in bee keeping and offered training to our young diplomats. His most recent project has been technical assistance in fish silage which would be of great assistance to St Kitts and Nevis.

“I thank Ambassador Pandiani for his tremendous contribution to stronger bilateral relations between St. Kitts/Nevis and Argentina,” he said.