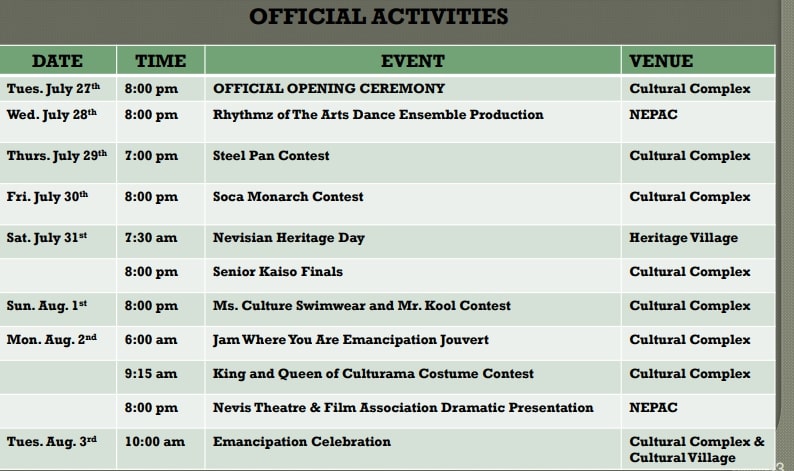 Proposed calendar of events for Culturama 47

NIA CHARLESTOWN NEVIS (April 15, 2021) – – The Culturama Festival Secretariat has released a proposed calendar of events for the scaled down, COVID-compliant Culturama festival 2021.

In an interview with the Department of Information, Mr. Antonio “Abonaty” Liburd, Executive Director at the Culturama Secretariat, unveiled the events already approved for the festival.

“The main events for Culturama 47 begin Tuesday, July 27 with the official opening ceremony at the Cultural Complex at 8 p.m. On Wednesday, July 28 at 8pm at the Nevis Performing Arts Centre (NEPAC) we’ll have a dance production being staged by the Rhythm of the Arts Dance Ensemble.

“On Friday, July 30, at the Cultural Complex at 8 p.m. we have the Soca Monarch competition.

“On Saturday, July 31, at 8 p.m. at the Cultural Complex we’ll have the Senior Kaiso Finals, Sunday August 01, we have the Miss Culture Swimwear and the Mr. Kool competition,” he said.

On Monday, August 02 the Secretariat will host a virtual “Jam where you are Emancipation J’ouvert” with a twist. Local Mas camps have been invited to submit a male and female in parade costumes who will perform with the electronic bands for a chance to win King and Queen of Culturama.

Mr. Liburd also revealed that an enhanced version of the annual Food Fair will be held at adjoining venues on August 03.

“On Tuesday, August 03 from 10 a.m. we’ll be having Emancipation Celebration. It will be an all-day affair. We’ll be using the Cultural Complex and the Cultural Village.

“We’ll have vendors set up to sell local food we’ll have cultural performances from all of the different folklore groups, we’ll have folk music- string band, big drum- and we’ll have the electronic bands and deejays,” he said.

Other events include a steelpan competition at the Cultural Complex at 7 p.m. on July 29; Nevis Heritage Day on July 31 at the Heritage Village in Fothergills from 7:30 a.m. to 6 p.m.; and on August 02, the Nevis Theatre & Film Association will put on a dramatic presentation at NEPAC at 8 p.m.

According to the Director, there will also be a number of pre-Culturama activities leading up to the main events.

The senior kaiso tents will launch on June 26 at the David Freeman Centre of Excellence (DFCOE) in Gingerland at 8 p.m., with a second tent at the same location on July 03.

Additionally there will be a Soca tent hosted at the DFCOE at 8.p.m on July 10, and Senior Kaiso Eliminations on July 18 at 6pm.

The Soca semi-finals will be held July 24 at the Cultural Complex at 8 p.m.