Permanent Secretary in the Ministry of Youth and Sports Mr. Alsted Pemberton presents award to Lester Liburd for his contribution to Culture
NIA CHARLESTOWN NEVIS (OCTOBER 01, 2012) — Lester Liburd of Cole Hill was the most recent Nevis youth recognised for his contribution to Culture, by the Ministry of Youth and Sports in the Nevis Island Administration on September 28, 2012. He was presented with the Appreciation/Youth Award plaque by Permanent Secretary in that Ministry Mr. Alsted Pemberton at the Nevis Cultural Development Foundation’s office.

Mr. Pemberton congratulated Mr. Liburd, the 13th recipient of the award since the programme commenced in January 2011. He reminded that the award was a brainchild of then Minister of Youth and Sports Hon. Hensley Daniel, who held the view that Nevisians young and old should be recognised for their contribution to the development of Nevis.

“This initiative, this Youth Achievers award is the brainchild of the Hon. Hensley Daniel, former Minister of Social Development. It is in line with his thinking that persons should be recognised for the contribution they are making here on Nevis. He would have done recognition of the seniors and he would have spoken about recasting the society of Nevis in the image of a local person, by renaming a number of landmarks in Nevis.

“The then Minister Hon. Hensley Daniel had been doing a lot in this area ensuring that our local persons are recognised here on Nevis. So I want on behalf of the Ministry of Social Development, commend the Youth Division of the Social Services Department for continuing to recognise our young persons here on Nevis. I want to publicly congratulate Mr. Lester Liburd for achieving this feat. Lester, thank you very much,” he said.

The Permanent Secretary also recalled Liburd’s young days as a part of the St. Johns Community Improvement Club (SJCIC) since he too was a member and commended him for his accomplishment in drumming years later based on the unmistakable impact the group and its leadership had on the youngster into his adult years.

“The profile indicated that he heard the drumming coming from the Mandela Community Centre and so he was encouraged to come across to join the SJCIC. At that time Mr. Hensley Daniel was the President of SJCIC, so Mr. Hensley Daniel would have had some imput in Lester from the early age, as it relates to drumming,” he said.

In response to his recognition Mr. Liburd thanked the Ministry of Social Services through its Youth Division and those who helped him become so intimately involved with the drum.

“It all started from a very tender age I was about probably 12 years old and I would hear the drums coming from the Mandela Centre and I would run over there. I have to say thanks to man like Sooty Byron because a drum is a very sacred instrument and you are not really allowed to play somebody else’s drum but from the get go, Mr. Sooty Byron saw the interest and he allowed me to play his drums. 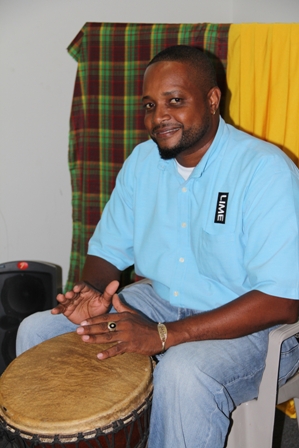 “I think those drums were made by the guy you see walking around town in some tight shirt with some bongos on his head we know him as ‘Papu’ but I think his name is Johnson Hanley that’s where it started with me and then playing with, like Mr. Pemberton said, Ron Esdaille, Sooty Byron, Everton ‘Swagga’ Powell, I just gained more and more interest,” he said.

Notwithstanding, Mr. Liburd urged other youths, male or female to turn to the drums like he did since drumming continued to help him go through life.

“I think drumming we should all respect because it’s a foundation instrument from where our ancestors use to communicate between each other, so I hold it very dear to me it is a sacred instrument.

“I would encourage young guys or even young women out there to take up a drum. Instead of getting into some kind of gang or stealing or anything like that take up a drum. To tell you the truth eh, sometimes when I am feeling depressed or I cannot get something work out, I would play a tune and Reese [member of drumming group I-Africana Drummers] can tell you I always tell them you got to look to the drum because the drum is a powerful instrument and we have to pay some respect to it,” he said.

His profile was read by Artistic Manager at the Nevis Cultural Development Foundation Ms. Dianne Hobson while Youth Development Officer in the Ministry of Youth and Sports Ms. Vieda Leiser Mills served as Chairperson for the event.