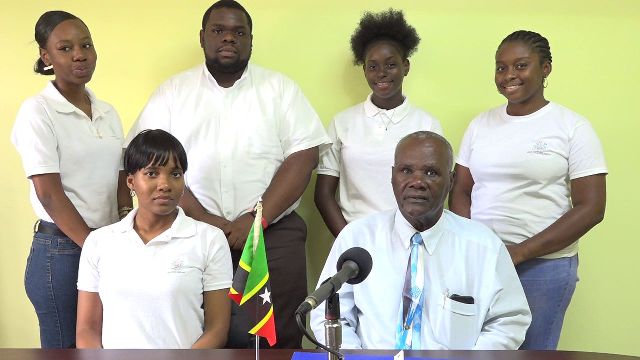 Mr. Rol-J Williams of Nevis Sixth Form College, Ms. Lauren Lawrence and Ms. Celestial Hanley from Charlestown School (CSS) and Ms. Charlyn Myers from Gingerland Secondary School (GSS) were chosen from a 32 students who participated in a Youth Parliamentary sitting at the Nevis Island Assembly on May 25, 2018. They will be chaperoned by Ms. Uta Taylor, a teacher at CSS.

The debate is part of the 43rd CPA Regional Conference of the Caribbean, the Americas and the Atlantic Region, which will be held at the Marriott Hotel in the Cayman Islands from June 15 to 23, 2018.

Mr. Smithen said the students will join counterparts across the region to debate on the Brexit referendum in the United Kingdom.

“In accordance with the resolution that was forwarded to us, this year’s debate will be in relation to the United Kingdom Brexit referendum results that was announced on the morning of the 24th day of June, 2016, that showed a 51.9 percent of those who voted in favour of the United Kingdom leaving the European Union,” he said.

The President of the Assembly, added that the youth parliamentarians were actively preparing and, are looking at the pros and cons of the resolution. He believes they would do the topic justice at the debate.

Nevis has participated in the youth parliamentary conference since its inception in 2000 in the Bahamas and has been successful.

“Nevis has been in the forefront, to a large extent, within the youth parliament. We have had successes. I recall in 2015, Mr. Rol-J Williams was the Best Speaker and he was showered with gifts because of that. It was decided that they…do not have it as a competition.

“I agree with that, let the children speak freely without trying to compete but at the same time, they have been getting rewards here and there in terms of their approach…but the idea for me is the expression, the knowledge that one would gain from participating in forums like these,” he said.

Mr. Smithen believes that the benefits of participating in the debate are two-fold. The participants are given the opportunity to discuss among their peers in the region and provided with a better understanding of the workings of parliament which augurs well for their future.

He noted that the attendance at the conference is not a government matter but a parliamentary one. However they do receive a stipend from the government to assist with some of the cost as well as financial assistance from the private sector to help defray cost for accommodating the students and airfare.

Mr. Smithen is expected to leave Nevis for the Cayman Islands to attend the 43rd CPA Regional Conference on Saturday June 16, 2018.