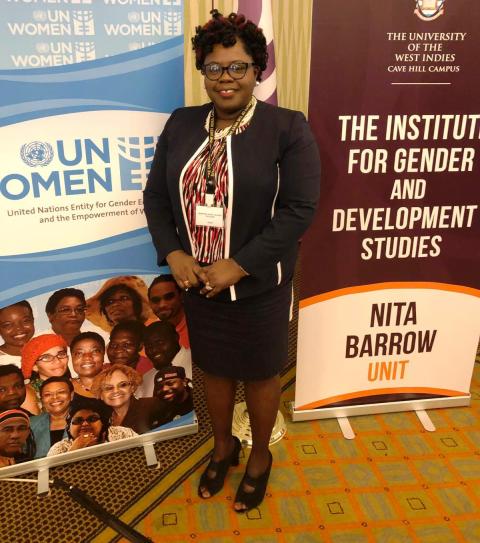 Hon. Hazel Brandy, Junior Minister responsible for Gender Affairs on Nevis at a three-day gender-based regional forum on February 10, 2020, at the Hilton Hotel in Barbados

NIA CHARLESTOWN NEVIS (February 12, 2020) — Hon. Hazel Brandy-Williams Junior Minister responsible for Gender Affairs on Nevis is attending a three-day regional gender-based conference which concludes on February 12, 2020, at the Hilton Hotel in Barbados. The theme is “Building a coordinated position for Caribbean negotiations on Beijing+25”.

The multi stakeholder meeting is sponsored by UN Women Caribbean; Caribbean Community (CARICOM), Caribbean Women In Leadership (CIWIL); the Institute for Gender and Development Studies: Nita Barrow Unit at the University of the West Indies (UWI) – Cave Hill; the Westminster Foundation for Democracy (WFD); and ParlAmericas. It brings together ministers, parliamentarians, and representatives from civil society and multilateral organisations as well as gender machinery from the Anglophone Caribbean countries.

According to ParlAmericas, the objective of the meeting is to hold focused dialogue on the review processes, negotiations, and next steps for the Caribbean region that commemorate the 25th anniversary of the Beijing Declaration and Platform for Action.

The areas under discussion are: the introduction to the Beijing Declaration and Platform for Action; Overview of Caribbean Progress: From Beijing’s Pillars to Generation Equality’s Themes; Introduction to Negotiations; Establishing Caribbean Priorities in Regional and Global Negotiating Spaces; Developing Common Ground on Issues of Concern; and Process and Next Steps for Input into the Political Declaration.

Apart from participants from St. Kitts and Nevis, other islands represented were Antigua and Barbuda, Belize, Barbados, Trinidad and Tobago, Grenada, Dominica, St. Lucia, St. Vincent, The Bahamas and Jamaica. There are over 65 participants attending the meeting.

Meantime, Minister Brandy-Williams noted the Barbados forum is being held in preparation for a more significant meeting called “Conference on the Status of Women”. It will be held in New York in March 2020.

“At this forum the Caribbean will go in with a united front on a number of issues faced by women in the region,” she said.