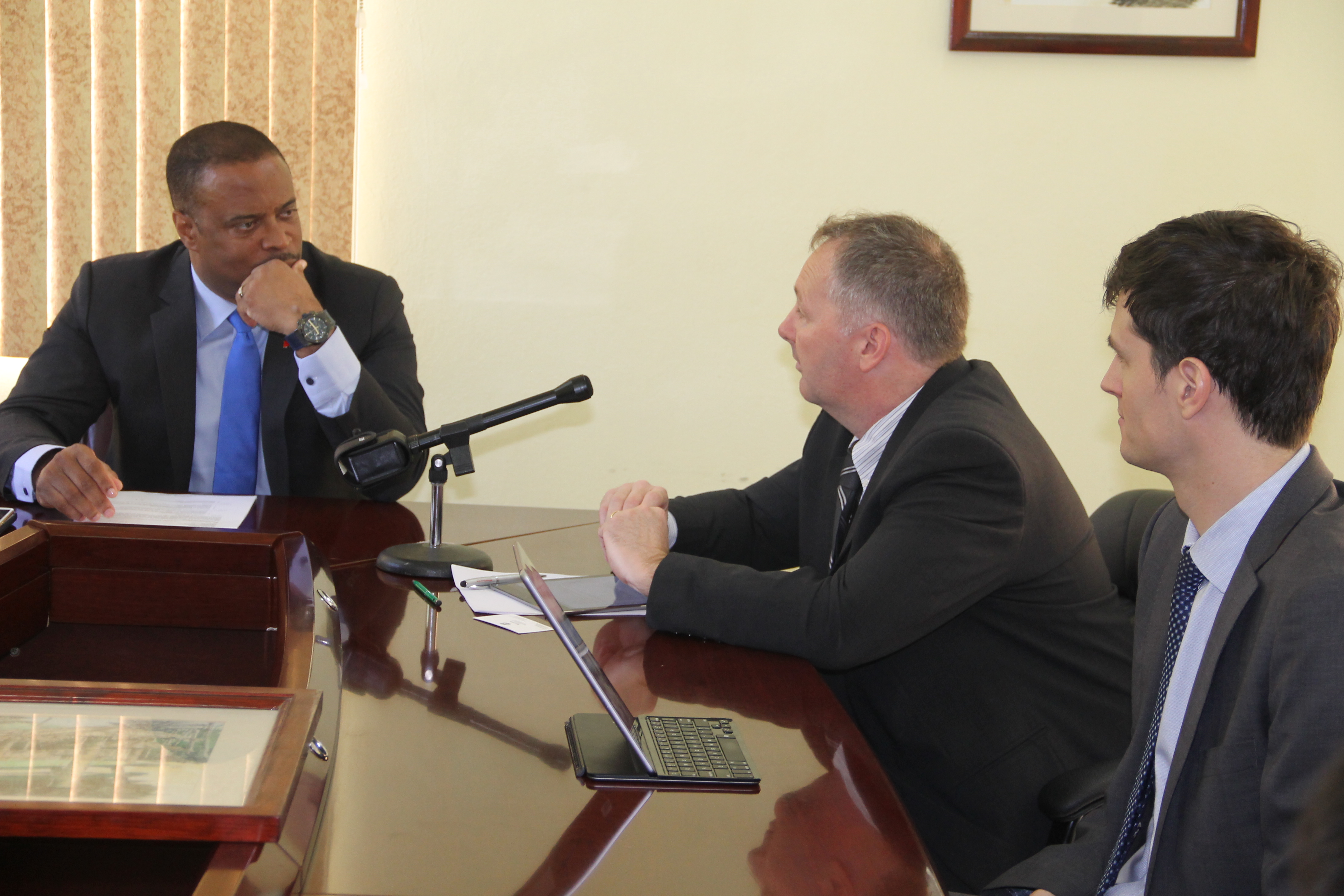 Premier of Nevis Hon. Mark Brantley, in discussion with IMF Consultant Mr. Matt Davies; and Nicholas End, Economist at the Department of Public Finances on February 02, 2018 at the NIA conference room at the Social Security Building

NIA CHARLESTOWN NEVIS (February 05, 2018) — A team of delegates from the International Monetary Fund (IMF) met with Premier Hon. Mark Brantley and the Ministry of Finance to engage in discussions and to render advice on the fiscal prudence of the Nevis Island Administration.

In opening remarks, Premier Brantley briefly spoke to the challenge of pinpointing Nevis’ contribution on a Federal level.

“We have had and continue to have to have discussions internally because, of course, part of the difficulty we’ve had is in terms of measuring Nevis’ position, vis-à-vis the overall Federal position, and certainly we hope that working with our technocrats here at the Ministry of Finance and with the IMF, that we ultimately can get to a position where we can have perhaps a more adequate measure as to where Nevis, as an island, stands in relation to the overall formulation of GDP and the like for the country as a whole,” he said.

This would influence discussions at the Federal level so as to calculate and potentially implement legislature that would govern the establishment of accounts that should be appropriated for circumstances such as in the event of natural disasters.

In brief remarks, Mr. Matt Davies, Division Chief of the Resource Management Division of the Fiscal Affairs Department at the IMF, said the team will deliver a report to the Prime Minister of St. Kitts and Nevis Dr. Hon. Timothy Harris with some recommendations provided to the government for comments.

He said the Prime Minister had requested the team advise the Federal government in two areas: how St. Kitts can develop its budgeting and fiscal management systems to ensure fiscal sobriety and; how the benefits of sobriety, over recent years, aided by the citizenship by investment revenues, can be put aside and used only for really special circumstances so that the savings of the nation is available for future generations.

“In that idea is particularly how they can be put aside to make sure that St. Kitts and Nevis can deal with the consequences of natural disasters which are unpredictable by their very name… The Prime Minister talked about this in the budget speech as a ‘Growth and Resilience Fund’ so our job is to think about how that fund could be established in relation to the budgets.

“For Nevis, we want to really get a sense of what the main budgetary issues are, where the opportunity and constraints you see might come from if the government opted to enforce the sobriety and to understand a little bit more about whether there are any differences both budgetary and vulnerability to natural disasters in Nevis or St. Kitts. Make sure we understand your perspectives so that we can integrate it within the recommendations,” he said.

The other members of the IMF delegation were Mr. Matt Crooke, Economist and Consultant; Takuji Komatsuzaki, Senior Economist at Caribbean 1, Western Hemisphere Department; and Nicholas End, Economist at the Department of Public Finances.