Denise Morgan, Principal of the Montessori Academy Nevis with a group of Grade 4 and 5 students including Denise Summers (first row left), Alexandria Johnson (second row left) and Dylan Theron (second row right) at the Nevisian Heritage Village during the Ministry of Tourism’s Open Day, a part of Exposition Nevis on May 11, 2017
CHARLESTOWN NEVIS (May 17, 2017) — A mixed group of Grade 4 and 5 students from the Montessori Academy Nevis, visited the Nevisian Heritage Village on May 17, 2017, and left with an experience they won’t soon forget.
For Dylan Theron, two things during the visit peaked his interest.
“What I really liked were the ovens and the second house Hut #8. I quite liked all of the sewing machines there and the goose. I thought they looked pretty cool.
“I know a lot about Nevis’ heritage but seeing it kind of makes me feel a little different about how it use to be before we had what it is like now. Now we have technology and more people have bigger houses now. Before they did not have any of that. They mostly had small huts and technology wasn’t around yet,” he said.
However, Denise Summers noted that the blacksmith and his creations captured her interest the most.
Alexandria Johnson also liked the huts, old sewing machines, the tools used by the blacksmith and what she believed to be “expensive” tea cups on display in a traditional house. 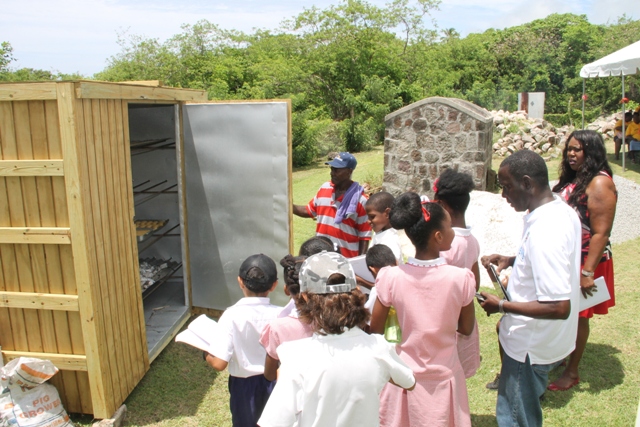 The student’s visit to the Village at Fothergills, was part of the Ministry of Tourism’s Open Day. The interactive setting showcased life on Nevis especially the history of housing and some culinary delights.  The event formed part of Exposition Nevis themed “All things Tourism”, is designed to bring greater awareness to the island’s tourism product.
Meantime, School Principal Denise Morgan, who accompanied the students, said the visit to the Village was an interesting one for them since the school is a mixed one with mixed cultures.
She explained that the exercise will assist the students with their Social Studies lessons because they had the opportunity to experience the actual village, how technology has changed the way of life on Nevis and the progression of the housing evolution. 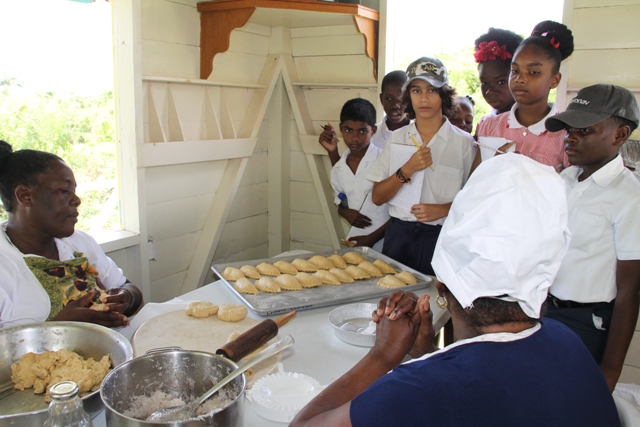 “When we go back to classes, we can go through the years and see how things have changed. They can actually see their studies for real now rather than actually just seeing it in books,” she said.
Ms. Morgan described the student’s reaction to the cooking demonstrations as interesting.
“It’s nice to see people starting from scratch again rather than using processed foods. So that’s been really interesting for the children to see how things go from scratch, right into going into the oven and coming out delicious,” she said.