NCDF Chairman Mr. Halstead Byron, accompanied by Manager of the Research and Documentation Unit at NCDF Mr. Chesley Davis and NPAC Project Manager Mr. Dwight Powell, on Tuesday [Jan. 11], toured the facility at Pinney’s Industrial Site where they observed the completion of the building’s physical structure.

In an exclusive interview with the Department of Information, Mr. Byron said “the delivery of the [Nevis] Performing Arts Centre is going to do wonders for Nevis.” He added that Nevisians had, for many years, “longed for” an official building to display their talents in front of an audience.

In highlighting the benefits that the centre’s construction would bring, Mr. Byron said, “the programmes in place at the cultural foundation are going to move cultural development, cultural preservation [and] cultural promotion to another level.” 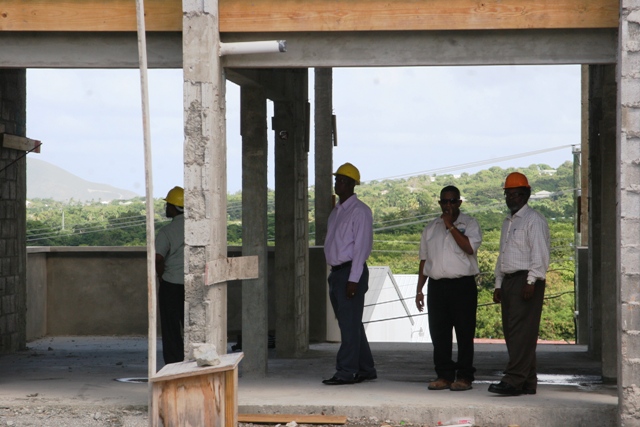 Advisor to the Premier Mr. Llewellyn Parris joins men on tour of the centre

“Having a performing arts centre in Nevis,” he added, falls in line with the vision of the cultural pioneers who formed the Nevis Dramatic and Cultural Society [NEDACS] in the 1970s.

Mr. Byron affirmed that the performing arts centre, once completed, would not affect the already functioning entertainment venues on the island.

The Nevis Cultural Complex, he said, would still be used to facilitate events with very large crowds of up to 2000 patrons while the island-wide community centres would continue to host community-related events and small programmes. While the status of the Nevis Cultural Centre, located on Old Hospital Road, is uncertain, Chairman Byron said the popular venue could still benefit the Nevisian community.

“We may be in a fight with the Ministry of Finance to keep the cultural centre that we have at the moment but I am for that so that other activities can continue to happen there if you cannot reach the level that we want to see in the performing arts centre,” he explained.

When asked about the kinds of performances that would be featured at the centre, Mr. Byron affirmed, “only the best should be on show in the performing arts centre.” 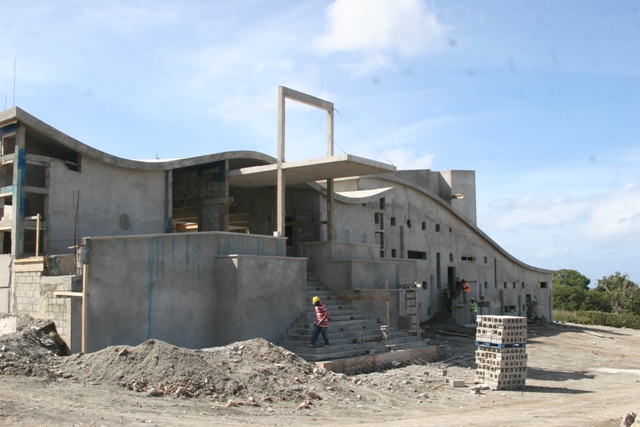 According to Mr. Davis who has worked with the Ministry of Culture for a number of years, “the performing arts centre will not only be for the performing arts” as it is expected, in the centre’s courtyard, to also showcase “the visual and culinary arts.”

Meantime, Project Manager Powell told the Department of Information that despite the inclement weather conditions during the latter part of 2010 that delayed work, his team remained dedicated towards delivering a top-class centre to the people of Nevis.

“We have completed the structure of the building. I would say up to about 95%. What remains is the finishing and the furnishings which includes tiling and the various floor finishes, the acoustic, ceiling, proper lighting, sounds and all the furnishing that is associated with the theatre area. Bathroom fixtures and the various equipment in the courtyard along with doors and windows and painting is what we are now pursuing in this phase,” Mr. Powell explained.

He added that his team would also be carrying out external work, such as the construction of walkways and a parking lot along while facilitating sewage disposal and proper drainage.

Of the approximate 35 persons working on site, 80 percent are Nevisians. Mr. Powell indicated however that additional persons would be contracted to work on the final phase of the project. 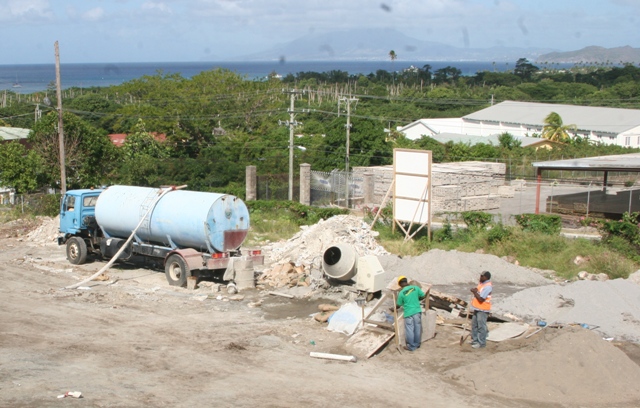 Nevisians at work at the Nevis Performing Arts Centre

Speaking specifically about the island’s Minister of Culture the Honourable Hensley Daniel, Project Manager Powell said he was pleased with the assistance of the Nevis Island Administration, who, according to him provided “very good cooperation.”

“I must say that the Nevis Island Administration played a very vital role in terms of cooperation and support in getting the project underway and in terms of the construction progress. They continue to do so in terms of facilitating when needed and I must say we are very appreciative of that.

Mr. Powell is employed with Surrey Paving and Aggregates: a company that has worked on a number of projects on Nevis. These projects include the construction of the island’s main road and the drag strip at the St. James Raceway and the development of infrastructure in Cherry Garden, Prospect, Pinney’s and Ramsbury. Surrey Paving and Aggregates has also commenced work on mini-stadiums in Brown Hill and Cotton Ground villages.

The centre, equipped with all its trimmings, is expected to be “delivered,” Mr. Powell said, “within three months.”