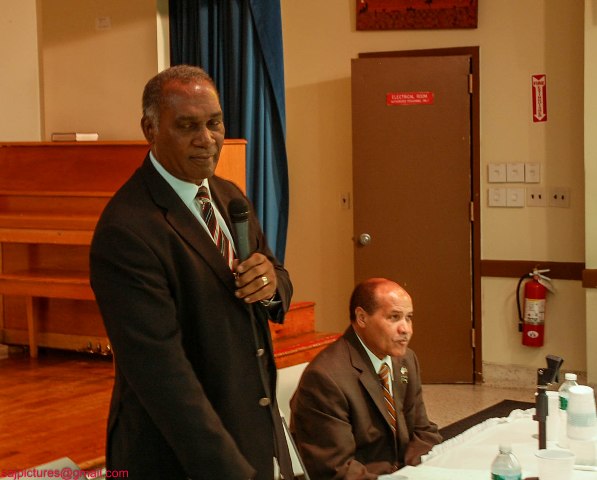 Premier of Nevis Hon. Vance Amory addressing Nevisians at the St. Luke’s Episcopal Church in the Bronx, New York on May 23, 2014 with Mr. Edmund Sadio a successful Nevisian businessman seated.
BRONX, NYC (May 23, 2014) —  “We are in the process of rebuilding the financial stability of the Nevis Island Administration” (NIA), so says the Hon. Vance Amory, Premier of Nevis, at a meeting on Friday 23rd May, 2014.
The meeting that was held at the St. Luke’s Episcopal Church in the Bronx New York, was attended by supporters, well-wishers and Nationals of St. Kitts and Nevis who wanted to get a first-hand account of the developments taking place in Nevis, since the return of the Concerned Citizens Movement Administration to government in Nevis.
The Hon. Vance Amory was transiting through New York on his way from a meeting in London. He said he was delighted to meet with nationals to provide an account of his Administration’s stewardship since the election that saw his party return to power.
The Premier spoke on the progress of the investigations of the Treasury Fire in Nevis. The NIA  he says, is awaiting the Federal authorities to continue the investigation after a preliminary report which was done by a NIA-hired Canadian Fire Chief [retired], was passed on to the police.
He updated the audience on the difficulties experienced in rolling over the Bond issue, and providing a guarantee to the bond holders, that his Administration would guarantee the principal of all lenders, as some were mindful of the “haircut” holders received from the Federal Government recently.
He addressed the plans to borrow funds to relocate some of the NIA administrative offices to buildings on the outskirts of the town, in properties that are owned by the NIA but have been left in a state of abandonment. The Bath Hotel will also be getting a face lift and converted into a Heritage Society Site.
Other issues addressed were the current state of the Dialysis introduction in Nevis, the state of the geothermal operations and an overview of the upcoming elections and where his party stands on the matter. 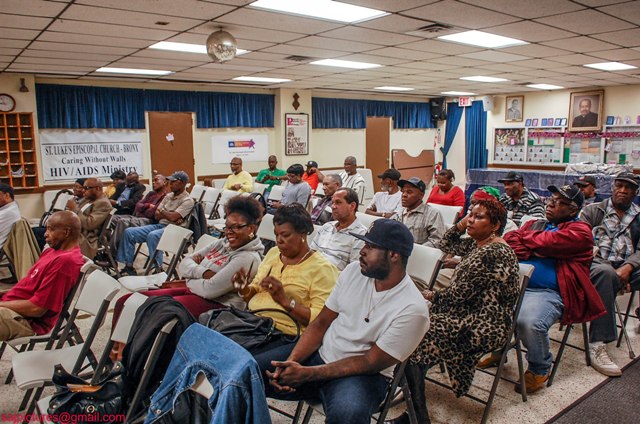 He said the matter is being discussed in the public domain, so that the people knows what will happen the day after the election. “No one will be coming to Nevis in the middle of the night by boat” the Premier added, “the public will know what to expect.”
A lively question and answer period followed the Premier’s presentation, as the audience sought to get additional information on matters affecting their homeland. Winston “Cookie” Warner, the former Controller of Customs in St. Kitts-Nevis, made a presentation, even though he was not a panel member, on the workings of the National Bank Board and it’s impasse with the NIA.  Mr. Warner, himself being a former Director of the Bank.
The meeting went well into the night and concluded with light refreshments. Mr. Edmund Sadio, a successful Nevisian businessman, thanked the audience for their attendance, despite such short notice.
By Samuel A Jones