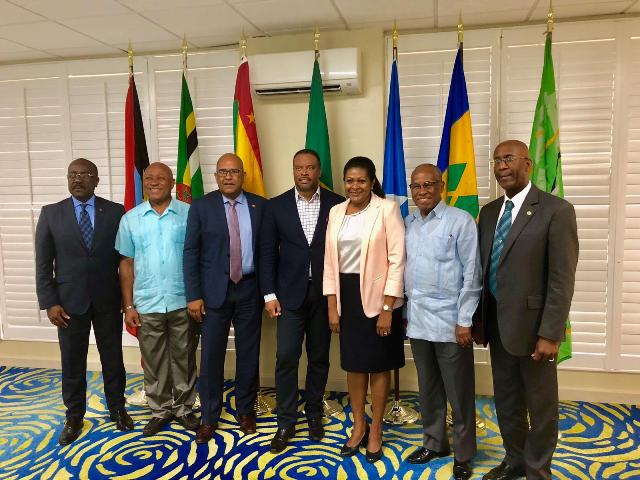 SKN FOREIGN AFFAIRS (May 13, 2019) — Hon. Mark Brantley, Minister of Foreign Affairs and Aviation, is currently in Grenada to attend the Fifth Meeting of the Organisation of Eastern Caribbean States (OECS) Council of Foreign Affairs (COMFA), and the Twenty-Second Meeting of the Council of Foreign and Community Relations (COFCOR), which are taking place at the Radisson Resort, Grand Anse, Grenada, from May 12-14, 2019.

At the OECS COMFA meeting, Minister Brantley reiterated the need for the OECS member states to take a second look at their strategy for addressing the current issue of blacklisting by the European Union as a means of stemming the tide of negative impacts from blacklisting.

He strongly recommended the forging of alliances with influential development partners and conducting a technical analysis of other ways to seek redress to the economic and reputational damage that follows black listing.

Minister Brantley welcomed the recent decision to establish the joint mission in Morocco in June 2019 as a further step towards deepening our engagement with Africa. He equally focused on the need for St. Kitts and Nevis and the wider OECS to adopt a similar approach in establishing a physical presence in Addis Ababa, Ethiopia, the seat of the African Union.

At the COFCOR meeting, the Ministers will discuss inter alia, the region’s relations at the bilateral, hemispheric and multilateral levels, update on BREXIT and its implications for CARICOM (Caribbean Community), the situation in Venezuela, and developments at the United Nations including Security Council Reform.