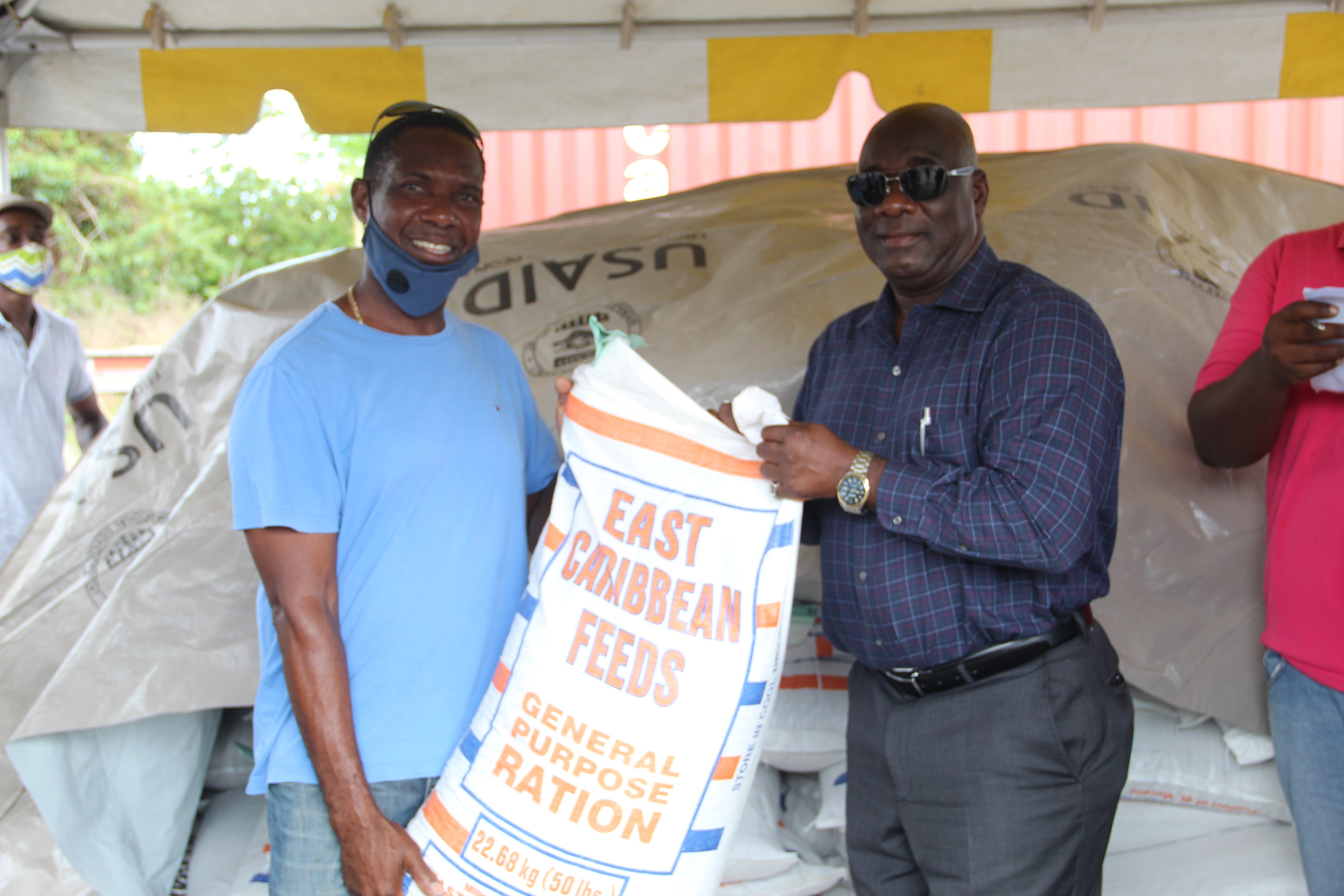 (L-r) Mr. Morris Hanley, one of 154 livestock farmers on Nevis receiving free animal feed in a Nevis Island Administration/Eastern Caribbean Group of Companies partnership from Hon. Alexis Jeffers, Deputy Premier of Nevis and Minister of Agriculture at Prospect on July 15, 2020

NIA CHARLESTOWN NEVIS (July 16, 2020) – One hundred and fifty-four livestock farmers on Nevis benefited from a donation of animal feed in a Nevis Island Administration (NIA)/Eastern Caribbean Group of Companies (ECGC) partnership, a gesture described as a show of support for the farmers.

The $33,000 worth gift of feed which was distributed by Hon. Alexis Jeffers, Deputy Premier of Nevis and Minister of Agriculture, at Prospect on July 15, 2020, was the result of a collaborative effort between the Ministries of Agriculture; Finance and Trade, and ECGC.

In his remarks at the handing over ceremony, Mr. Jeffers expressed his satisfaction with the cross section of livestock farmers we have here on the island.

“We have businessmen, we have taxi operators, we have the average guy who works in the construction field, and we also have persons who are in executive offices too.

“It therefore means that you sought to add to your regular income something else that can be to the good of Nevis, and I want to thank you for your effort,” he said.

The agriculture minister spoke to the long-standing relationship Nevis has established with the ECGC which is based in St. Vincent and thanked them for coming to the assistance of farmers on Nevis over the years.

He thanked the manager and staff of the Abattoir and urged the farmers to continue to patronize the services offered at the facility, and to continue to purchase their feed from ECGC.

Mr. Jeffers also spoke to a project for broiler production which the Department of Agriculture hopes to introduce to farmers on the island shortly, and expressed hope that they would embrace it.

The minister thanked the farmers for their support, and noted that the NIA, through the Ministry and Department of Agriculture, wanted to return the favour.

“We want to ensure that we reciprocate that support by providing you with all the necessary things that are needed to grow your business, to sustain you in this business so that agriculture can play the part that we know it can play here in the island of Nevis, more so the Federation of St. Kitts and Nevis as well,” he said.

Mr. Randy Elliott, Director in the Department of Agriculture, stated that the 825 bags of free feed is a show of continuing support for the livestock farmers, and expressed hope it would help boost their production.

“We are pleased to state that 154 farmers are going to benefit from this feed. This is just to show the continuing support and the confidence that the Department and Ministry of Agriculture have in our farming sector. It shows the support that we continue to push our farming sector especially as far as livestock and poultry is concerned.

“Let it be known that with this feed behind us we are hoping that the production here on the island of Nevis continues to improve, continues to get better, be able to become a little more self-sufficient in all that we do as it relates to livestock,” he said.

Mr. Colin Dore, Permanent Secretary in the Ministry of Finance, whose ministry was instrumental in securing the gift told the farmers that the venture is a show of support by the NIA for the development of agriculture on Nevis.

“It goes a long way in showing that even through the difficult times the Ministry of Finance, Ministry of Agriculture and the Nevis Island Administration stand with you the farmers during this period.

“Of course it is a partnership and one would hope at some point in the future, as we continue to put subsidies into agriculture, some of it would start to resonate down to the buyers because as you reduce your cost of production, there should be some scope where you can now reduce your cost to the final consumer of your goods and services,” he said.

Also present at the ceremony was Mr. Huey Sargeant, Permanent Secretary in the Ministry of Agriculture, who chaired the event; Mr. Floyd Liburd, Deputy Director of Agriculture, who delivered the Vote of Thanks and Mr. Kelso Clark, Livestock Extension Officer, who invited God’s presence in the proceedings.