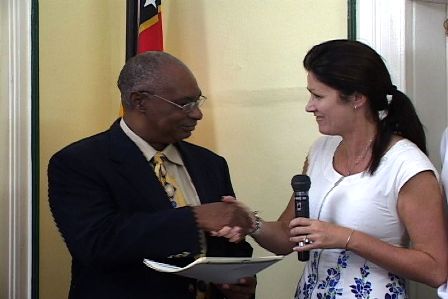 One hundred and seventy acres of land in the Pinneys area were officially repatriated to the government and people of Nevis on September 11, 2008, Premier of Nevis Hon. Joseph Parry was presented with the certificates of title by new Chief Executive Officer of Newfound NV Ms. Jayne McGivern.
The presentation took place at the Premier’s Office at Bath Hotel in the presence of Legal Advisor to the Nevis Island Administration (NIA) Mr. Patrice Nisbett and Mr. George Rolfe and Mr. Richard Foley of the Newfound management team.

Mr. Parry said he was pleased to have received the certificates of title to the land at the end of successful negotiations.

“I am very pleased at this time to have the certificate of titles for the 170 aces of land that has been returned to the Nevis island Government. So
(L-R) Legal Advisor to the Nevis Island Administration Mr. Patrice Nisbett and Premier of Nevis Hon. Joseph Parry with Newfound NV executives CEO Ms. Jayne McGivern, Mr. Richard Foley and Mr. George Rolfe
it is now our property and we also have the assurance that the historic sites would also be the property of the Nevis Island Government. 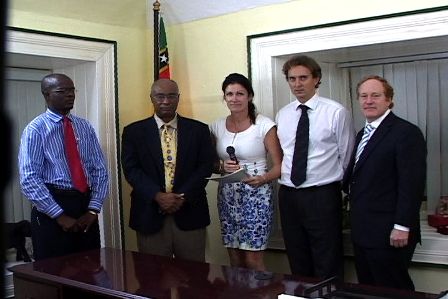 “At least we have been very successful in this exercise and we continue to work in the interest of the people of Nevis to ensure that we have at least a five star hotel on the project and that over the Next few years we could say that we have served the people well and the investors would say that they have delivered even though they took a long time in delivering,” he said.

The 170 acres had formed part of 600 acres of land that was sold to Newfound for hotel and villa development by the former NIA [Concern Citizens Movement-led Administration].

When the Nevis Reformation Party-led NIA took office two years ago, they were not satisfied with the agreement that was brokered between the former administration and Newfound, so it sought to re negotiate the arrangement. Successful
One of the certificates of title for a section of the 170 acres of land which was repatriated to the government and people of Nevis by developers Newfound NV
negotiations were concluded in March/April of 2007.

Mr. Parry also noted that the company had changed hands for the third time but had been assured by the new owners that the project would move forward with the establishment of a five star hotel.

“Initially we met with Ms. Bryan and later with Jeremy White, they are no longer involved in the project and I must tell the people of Nevis frankly, that the Humber project which was the project which initially attracted the former Administration is closed and this is the information we have gotten this morning.

“Ms. McGivern and her team they are focusing on Nevis and St. Kitts right now and they are hoping to move forward fairly rapidly. I must also tell the people of Nevis that “W” is no longer a factor and that they [new owners] are looking at some very up market properties. They have told us [NIA] and confirmed that the hotel would be first and that the hotel operators will be interested in working with the community as we have been assured before. I must say we are hopeful because it has been a long time now and that something will happen next year and that we would moving forward with this particular team,” he said. 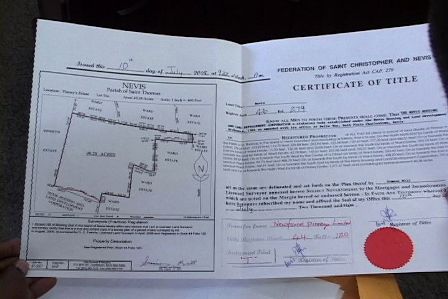 Ms. McGivern said she was pleased to return the certificates of title to the government and people of Nevis and gave an insight into the direction of the project.

“Since we became involved with Newfound and the management team that you see here took over in early July, we have assessed everything that has been done previously on the project and we are beginning to collect that move forward.