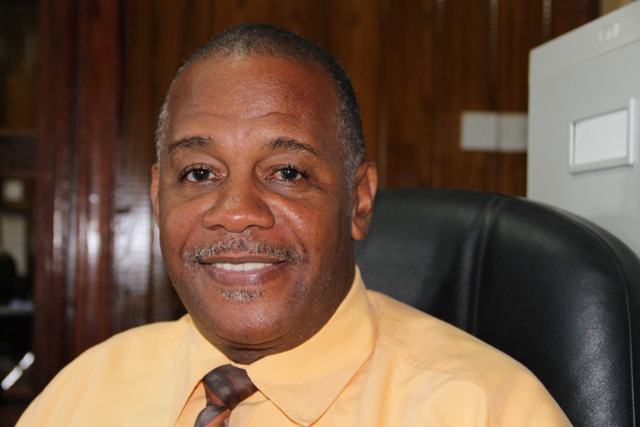 Permanent Secretary in the Ministry of Agriculture on Nevis Eric Evelyn at the Department of Information on May 01, 2014
NIA CHARLESTOWN NEVIS (May 01, 2014) –The second annual Agriculture Awareness Month commenced on May 1 and will be dotted with a number of activities  under the theme “On the Road to Food Security,” the same theme used for the recently conclude  20th annual Agriculture Open Day.
Permanent Secretary in the Ministry of Agriculture Eric Evelyn told the Department of Information on May 01, 2014, that it would be the second time that the month of May was designated for the awareness campaign and gave an insight into the activities, apart from a televised launch of the month by Agriculture Minister Alexis Jeffers, which would commence as early as Friday, May 2 at the George Mowbray Hanley Public Market in Charlestown.
“Every Friday for the month of May, we will be having a special sale of local onions at the Public Market but on Friday May 30 we will have local onions, products from the Abattoir, Agro Processing Unit and fruit trees from the Propagation Unit,’ he said.
The second major event will be a commemorative service of thanksgiving at the Shiloh Baptist Church in Ramsbury on May 4. It will commence at 11:15 a.m.
That activity will be followed by a fishing tournament and family fun day two days later.
“There will be a Fishing Tournament and Family Fun Day at the Indian Castle Beach on Monday May 5th. That event was scheduled to have taken place during the Easter weekend but had to be rescheduled because of unfavourable weather conditions. We already have nine boats registered for the event.
“The tournament will commence from 5:30 a.m. when the boats will leave port and they are expected to return by 4:30 p.m. There will be entertainment at the beach from midday till 7 p.m.,” he said.
On May 15, there is a planned panel discussion which is slated for the St. Paul’s Anglican School Room. Five panellists will discuss various aspects of Agriculture, Cooperatives and Fisheries.
Evelyn said one day later, on May 21, the Department of Agriculture would make presentations of fruit baskets to some of the field staff retirees.
The Permanent Secretary also spoke to other events that would be taking place during Agriculture Awareness Month 2014.
“During the month, we would also be erecting some signs to indicate where one could find the Department of Agriculture, the Abattoir and the Vet Clinic. We are also hoping to begin a coconut replanting programme and we will begin a collection drive of dwarf coconut plants for propagation which we will subsequently redistribute,” he said.
The month will climax with the launch of an international television campaign which will focus on the island’s agricultural thrust.
“We will also have the first episode of a six-part series “In Style” aired on Tempo towards the end of May. It is a six-part half hour series which will focus on various aspects of agriculture in Nevis. Each segment will run one per month with repeats, all in a bid to promote Agriculture as a viable industry that would promote our ‘Buy local and eat local’ campaign.
“We want to change the face of agriculture throughout the region and the world starting from Nevis and in so doing change the perception of agriculture,” Evelyn said.