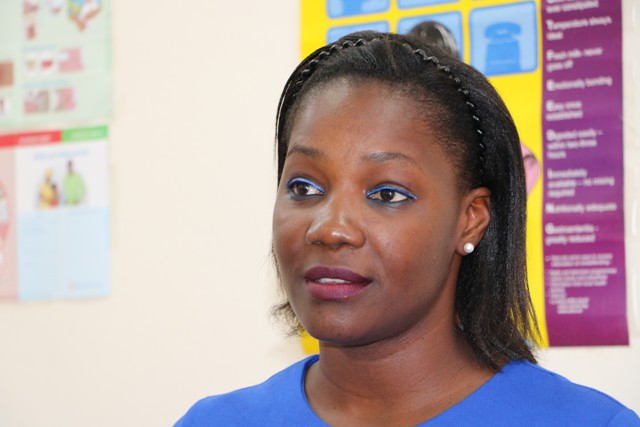 Ms. Latoya Matthew-Duncan, Nutrition Surveillance Coordinator in the Health Promotion Unit in St. Kitts, at the Alexandra Hospital’s Maternity Ward on May 23, 2019

NIA CHARLESTOWN NEVIS (May 28, 2019) — The main healthcare facilities in St. Kitts and on Nevis, the Joseph N. France General Hospital and the Alexandra Hospital respectively, are in the process of working toward certification as Baby-Friendly Hospitals, as part of the United Nations Children’s Fund (UNICEF) and the World Health Organization (WHO) Baby-Friendly Hospital Initiative (BFHI) launched in 1991.

Ms. Latoya Matthew-Duncan, Nutrition Surveillance Coordinator in the Health Promotion Unit in St. Kitts, while filming a documentary at the Alexandra Hospital on May 23, 2019, told the Department of Information that the move is to help increase the healthy practice of breastfeeding in the Federation.

“St. Kitts and Nevis is currently on the path to attaining Baby-Friendly status. So basically this is a part of the BFHI which helps different hospitals to attain Baby-Friendly certification…During the past years the numbers for breastfeeding has dwindled severely so we are really trying to help persons to focus more on breastfeeding and to have less formula fed babies.

“One of the major goals of BFHI, or being baby-friendly, is to ensure that babies are breastfed exclusively for six months. When we say exclusively it means no water, no formula, just breast milk. If it’s not from the breast it’s not exclusive. So we want to encourage persons to breastfeed exclusively for six months. Give babies only breastmilk for the first six months of their lives and then you can introduce complimentary foods after the first six months…and you continue to breastfeed up to 24 or even 48 months if you wish,” she said.

The BFHI programme is meant to improve the care of pregnant women, mothers and newborns at health facilities providing maternity services, for protecting promoting and supporting breastfeeding in accordance with the International Code for Marketing of Breastmilk Substitutes.

Ms. Matthew-Duncan noted that there is a certification process that the institutions will have to undergo which calls for external assessors visiting the island to evaluate and observe how baby-friendly both hospitals are.

“Another thing, they can stop any individual who works at the institution, for example domestic workers, laundry individuals, maintenance, and they can ask them basic things about breastfeeding, for example ‘What are the benefits of breast feeding?’ ‘What is a position used for breast feeding?’ They can ask basic questions about that. So they expect most of the staff at the institutions to be familiar with most of the basic information about breastfeeding. So this is part of the accreditation,” she said.

Ms. Matthew-Duncan added that if they are successful in their bid for certification, it would mean that the hospitals would join other health institutions around the world who are known as Baby-Friendly institutions. It would mean as it relates to breast feeding, at the Joseph N. France General Hospital and the Alexandra Hospital, the ideal meal or supplement would be breastmilk. Anything else would have to be either prescribed by a doctor or could only be used in extreme circumstances.

Hon. Hazel Brandy-Williams, Junior Minister of Health on Nevis, who met with the team at the Maternity Ward, endorsed the breastfeeding programme adding, “I would like to place on record that breastfed babies are the best. They are the happiest and they are definitely the healthiest.”