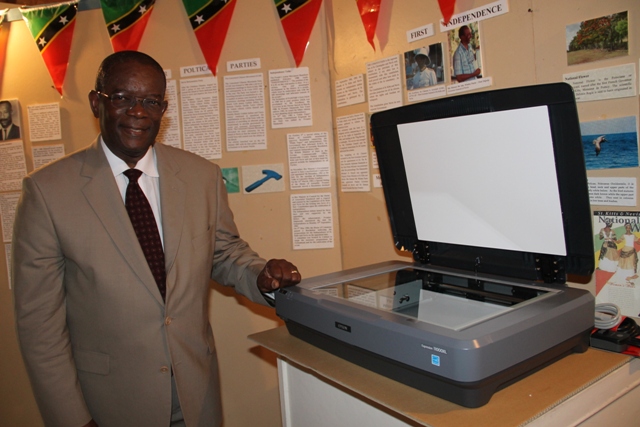 He expressed hope, that the unit would be used at both the Museum of Nevis History and Hamilton Museum for digitizing large manuscripts and for preservation of historical records.
Devon Liburd who accepted the scanner on behalf of the NHCS, thanked Dr. Hull for the gift. He said it is an important and useful piece of equipment for their preservation purposes.
He stated that the archive at the Museum of Nevis History is important to the NHCS and artefacts and documents were stored there.  He noted that archived information is being preserved for future generations, however, it is at present also available to the public for research purposes.
According to Liburd, technology is important for ease of access and the gift was a welcome one.
Meantime, Permanent Secretary in the Ministry of Tourism Carl Williams who represented the Minister of Tourism Hon. Mark Brantley, said the gift was appropriate for the work of the NHCS. 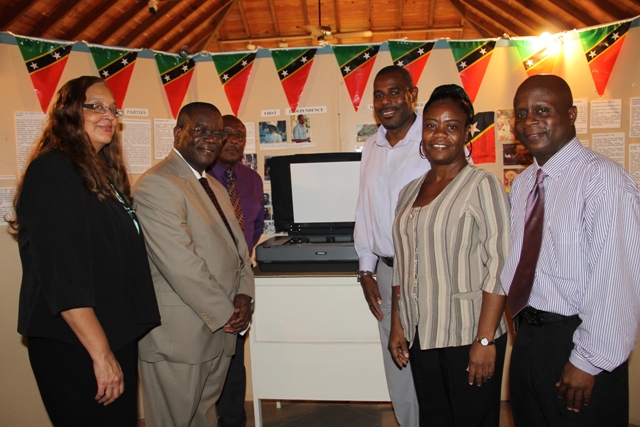 “This piece of equipment is very important. It is pivotal to their work and so we find it very timely and we are very glad for the generosity,” he said.
Williams added that part of the Society’s mandate is to research and document the history of the island and to keep and maintain an archive and registered the Nevis Island Administration’s (NIA) gratitude to Dr. Hull for his continued commitment and support to the island of Nevis.
Wakely Daniel Permanent Secretary in the Premier’s Ministry, Mrs Hull and staff of the NHCS