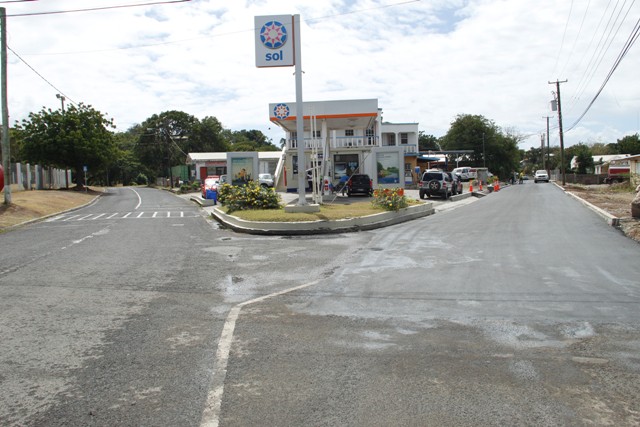 The new asphalted entrance to Bath Village opened to vehicular traffic on February 13, 2019. It is part of the first phase of the Bath Village Road Rehabilitation Project being undertaken by the Nevis Island Administration through the Public Works Department

NIA CHARLESTOWN NEVIS (February 14, 2019) – The Public Works Department (PWD) in the Nevis Island Administration (NIA) completed the first half of Phase 1 of the Bath Village Road Rehabilitation project on February 12, 2019, and work has already begun on the second half which is earmarked for completion in six weeks.

Hon. Spencer Brand, Minister of Public Works and Physical Planning on Nevis, told the Department of Information on February 13, 2018 that he is pleased with what has transpired so far on the project.

“I am indeed delighted to see that the initial phase of the Bath Village Road Rehabilitation Project was completed. I think that the quality of work we have seen there is certainly what I expected, and certainly surpasses even what many persons would have expected. I am satisfied with the quality.

“I believe that it was a piece of road that in all honesty took a bit longer than we anticipated. We would have seen the relocation of a number of the utilities,” he said.

He added that apart from the roadway, a number of driveways to various properties were constructed and they were done to the satisfaction of residents there.

A replacement u-drain was also constructed to accommodate the anticipated volume of water flowing in that area to the Bath Stream.

Preparatory work on the second section of Phase 1 commenced right after the first section was completed and immediately opened to vehicular traffic on February 13, 2019.

Mr. Brand believes the second section would be completed in quick time.

“We would be continuing going west to Black Hat area, and we anticipate that that portion of the work would be done in a much shorter period than what we had in this initial phase because we don’t anticipate the level of construction, as it relates to u-drains and the removal of other utilities and water mains and the like.

“We would get to that area immediately and we will continue to make sure that when all is said and done Bath Village would be looking brand new with their much improved interconnection of roads in the area,” he said.

Phase 1 is part of the larger project which entails a total of 1,650 feet road which is expected to cost $450,000. The Nevis Island Administration has taken a phased approach for the project’s completion.

At a town hall meeting for Bath Village residents in October 2018, to discuss details of the project, Mr. Brand spoke of the sections of road the project is expected to encompass and additional planned road work for the area designed to complement the project.

“My hope is that when this project is completed we will see the completion of rehabilitation work from Reliable Motors junction at the Island Main Road into Bath Village to the roundabout down to Black Hat, Ms. Butler, up the hill by Maude Smith Pre-School all the way over to VON Radio up to Spotlight connecting right next to the good fish lady and the other side of it coming from the roundabout, up the hill again to the dam all the way into Bath Village proper.

“We are also envisioning that we will see the completion of the section from the tamarind tree all the way to down to Flexy and the other section from the dam back down to Maude Smith Pre-School. That division that we hope to accomplish once this project would have been completed,” he said.

Meantime, Mr. Daniel Williams, Supervisor of Roads at the PWD told the Department of Information that they utilised 225 tons of asphalt for the first section of the project.

He added that vehicular traffic has been flowing through the entrance of Bath Village immediately after the asphalting was completed.

Mr. Williams noted that the use of asphalt mix has a distinct advantage giving way to vehicular traffic with little or no disruption to the motoring public.