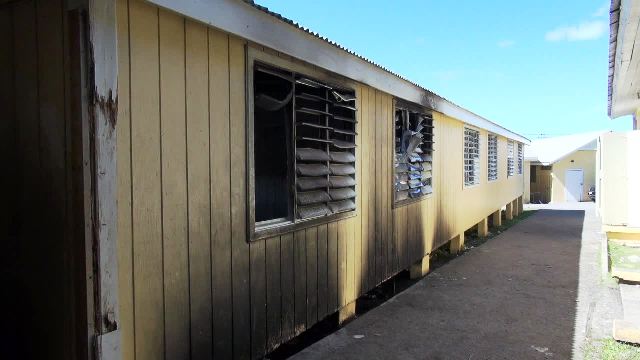 Block D of the Charlestown Secondary School after a fire on November 25, 2017

NIA CHARLESTOWN NEVIS (November 27, 2017) — The cause of a fire which destroyed a classroom at the Charlestown Secondary School (CSS) on November 25, 2017, has not yet been determined but investigations are ongoing, Mr. David Stapleton, Divisional Fire Officer on Nevis says.

Officers of the St. Kitts-Nevis Fire and Rescue Services, Nevis Division, responded to a fire call at the school at 9:17 p.m. On arrival they met a small section of a wooden building on fire. They successfully contained the flames with use of the fire tender.

Meanwhile, Mr. Kevin Barrett, Permanent Secretary in the Ministry of Education on Nevis, described the incident as unfortunate. He thanked the fire officers for their quick response and promptly extinguishing the fire.

Mr. Barrett said he has already met with Mr. Juan Williams, CSS Principal and Mr. Edson Elliot, Education Officer responsible for the secondary schools on Nevis, to find space to place the displaced students and to plan the way forward.

The Permanent Secretary said the fire posed a difficult situation for the school’s management and staff and appealed to the public to volunteer any information regarding the fire.

“I am appealing to anyone out there if there is any information that you could give to our police officers, the fire department as to what might have been the cause of this incident…

“The principal and his staff should not have to deal with coming to a place of work and meeting this type of damage. It is sad,” he said.

Mr. Barrett stated that on the scene of the fire, Hon. Vance Amory, Premier of Nevis and Minister of Education, Hon. Mark Brantley, Deputy Premier, Hon. Troy, Liburd, Junior Minister and Mr. Wakely Daniel, Permanent Secretary in the Premier’s Ministry and himself had a good conversation with Mr. Juan Williams, Principal of the CSS and assured him that he had the support of the Ministry of Education.