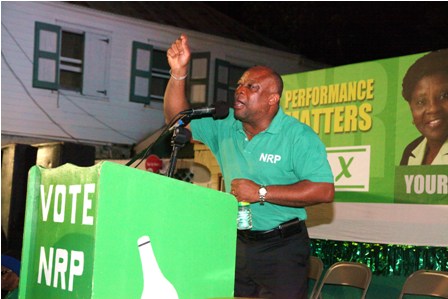 Hensley Daniel during local election (FILE PHOTO)
Charlestown, Nevis (Monday,January 16, 2012) – Deputy Premier of Nevis, the Hon. Hensley Daniel, the 1st named respondent (defendant) of the Election Petition brought by defeated CCM candidate Mark Brantley, has not been accused of any wrongdoing in achieving his victory over Mark Brantley in the July 11th, 2011 NIA Election.

Brantley is seeking a Court Order to overturn the July 11th 2011 Election result, which certified incumbent Deputy Premier Hensley Daniel victorious. The trial for the Petition began on Monday with opening oral submissions presented by counsel for petitioner Brantley as well by Senior Counsel Anthony Astaphan on behalf of all of the nine named respondents.

Among the named respondents of note are: the Premier of Nevis and the Attorney General.

During the hour-long opening oral submissions made by Senior Counsel Mendes for the petitioner, absolutely no allegation of wrongdoing was levied against Deputy Premier Daniel. Similarly, no allegations of wrongdoing were levied against the Premier of Nevis or the Attorney General. Counsel for the Premier, Mr. Oral Martin, told His Lordship Justice Lionel Jones that he expects the Court to dismiss the petition.

Mendes claimed that the Registration Officer, Mrs. Bernadette Lawrence, acted in violation of the law, which required the publication of a revised monthly list. In reaction to Mendes’ claim that none of the new voter registrants who registered between January and the cut-off date in 2011, before the election, should be allowed to vote, Justice Jones asked Mendes whether that would that not create some injustice.

In reaction to Mendes’ claim that NNC did not cover any of CCM’s campaign, Justice Jones asked Mendes whether NNC had refused to carry something. In reaction to Mendes’ claim that the failure of NNC to cover CCM’s campaign violated Constitutional rights, Justice Jones asked Mendes how he could be bringing a Constitutional motion in an Election Petition. Mendes’ response was, “good question.”

Senior Counsel Anthony Astaphan’s began his oral submissions by asking, “What precisely does a judge in an election case look at?” His submissions were largely focused on what he described as, “fundamental if not a critical decisive issue – the conduct of the petitioner.” He referred to Radix and Geary as his authority.

What other safeguards if any do the regulations provide to protect the process?” Astaphan stated that the regulations made provisions several other safeguards none of which were invoked by the petitioner; he never requested information, he never sought to attend objection hearings by the NRP. Mr. Astaphan also submitted that despite the fact decisions were given to the CCM on the 30th of May, there were no applications for judicial review or appeal by CCM. On the critical question of bias, Mr. Astaphan submitted that notwithstanding the allegation of bias made in March 2011, CCM continued with objections until June 2011.

Astaphan stated that the non-publication of revised monthly lists wasn’t a new occurrence. He said, “there never was, it wasn’t something that started last year.”

Other issues addressed by SC Astaphan included: notices for objections, failure by the petitioner to seek legal recourse to remedy his complaints prior to the Election, bias and misfeasance, and the Constitutional right of a voter to object to and expose improper registration.

His Lordship Justice Jones outlined at the commencement of the trial that Court would start at 9:00am daily and break at 11:15 for 15 minutes and then break for lunch at 12:30pm and resume at 2:00pm. It is expected that His Lordship Justice Jones will rule (on Tuesday morning), prior to the presentation of evidence by lawyers for the petitioner, on an application by the petitioner for the CARICOM Observer Report to be admitted as evidence and other applications before him.