NIA CHARLESTOWN NEVIS (March 14, 2013) — Organization of the American States (OAS) Representative to St. Kitts and Nevis Mr. Starret Greene believes that preparation at the community level was essential, if the effects of natural disasters were to be mitigated.

Mr. Green was at the time on Nevis to give his blessing to the commencement of an OAS sponsored project, an initiative of Helping Our People Excel (HOPE) Nevis Inc. entitled “Building Resilience to Natural Hazards, one Community at a Time” The project will be implemented in collaboration with the Nevis Disaster Management Department (NDMD) and the Department of Physical Planning. The ceremony was held at the Llewellyn Newton Disaster Management Facility at Long Point on March 11, 2013.

“Closer to home, changes linked to climate change can now be seen and the resultant effects and impact upon our lives and livelihoods will likely be negative. It is therefore right that we prepare now to make the necessary adaptation to the advent of climate change. Let us not be caught by surprise.

“With this in mind, I contend that preparation is the key to mitigate the effects of natural disasters, and there is no better preparation than at the community level,” he said.

Mr. Greene congratulated HOPE Nevis Inc. for what he described as the “production of a fine project”, whose ultimate goal was to build resilience to sustain communities, even when they subjected to the overwhelming destructive forces contained in natural disasters.

He encouraged all related stakeholders, to bring to bear their collective support and collaborative spirit in the implementation of the project, so that its impact would be felt across the five participating parishes. 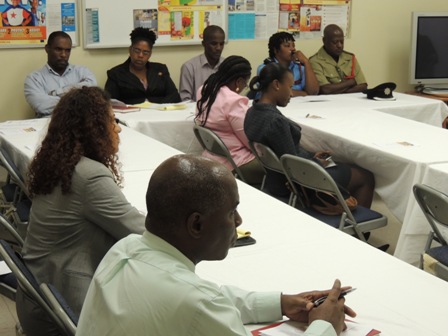 The OAS representative further added, that his Organisation was desirous of the project becoming an example of community self help, cooperation, vigilance and vision, which would motivate other communities to emulate what would be achieved in the five communities chosen under this project.

Mr. Greene said he looked forward to a satisfactory outcome when it was fully implemented.

According to Mr. Greene, HOPE Nevis Inc. together with other Non Governmental Organisations (NGO) in the Caribbean and Central America, were invited by the OAS Department of Sustainable Development to design technical cooperation projects that would help strengthen the capacity of civil society organisations and community associations to build sustainable communities within the framework of the Energy and Climate Partnership of the Americas (ECPA).

Each of the 14 NGOs selected in countries within the hemisphere received up to US$50,000 to implemented innovative community level development projects.

In the case of HOPE Nevis Inc. the group designed the project which would provide training to members of at least five communities across the island that would equip them to respond appropriately to the threat and occurrence of natural disasters in their individual communities.

He said although the project was not a novel one, its merit was in the fact that it placed responsibility squarely on the community to respond whenever the situation demanded it.

“That is why the project is designed to ensure that the requisite training and support are provided for persons in the designated communities.