(L-R) Minister of Culture in the Nevis Island Administration Hon. Hensley Daniel and Chairman of Culturama 2012 Mr. Halsted “Sooty” Byron at a press conference to launch Culturama festivities on Nevis. The event was hosted by the Culturama 2012 Committee on July 6th, 2012 at the Red Cross Conference Room on Chapel Street
NIA CHARLESTOWN NEVIS (JULY 10, 2012) — Despite the economic challenges on Nevis brought on by the world recession, Culturama, the island’s premier annual cultural festival will go on. That assurance came from Minister of Culture in the Nevis Island Administration (NIA) Hon. Hensley Daniel as he pointed to the many benefits of the festivity now in its 38th year.

The Minister was at the time delivering remarks at a press conference to launch the July 26th to August 7th festival, at the Red Cross conference room on Chapel Street. The event was hosted by the Culturama Committee 2012 under the Chairmanship of Mr. Halsted “Sooty” Byron and moderated by Committee Member Ms. Jaedee Caines.

“We have to have Culturama every year. It has a tremendous social and psychological impact on the population. It gives all of us the opportunity to lay down our hair for a weekend to relax and to forget about all the stresses and strains of life and just have a party for at least a period of time.

“It shows that everywhere in the world where people are concerned about health, wellness and wellbeing, you have some time where you pause, to actually just reconnect with life and with culture,” he said.

The Culture Minister described Culturama as unique and reminded the public of the festival’s characteristics, which he said provided Nevisians with the opportunity to display their heritage.

“I want to remind all of us of the uniqueness of Culturama with its particular display of dance and drama and in that context I want you to join me in congratulating all of the participants who have come forward for the various pageants because it is a good thing and it provides tremendous exposure for our young people.

Notwithstanding, Mr. Daniel also noted the significant economic value attached to Culturama. He said although he was unable to provide actual statistics from the Ministry of Finance, he was certain that hair dressing salons and clothing stores in St. Kitts and Nevis made good business during that season and patrons money was set aside to participate in the various cultural events.

“We in the Government have made some significant investment in culture. We have just built a multi-million dollar Nevis Performing Arts Centre, which we opened on April 28th and that is to facilitate the hosting of several activities… That is a significant investment and that is supposed to drive the interest in music, dance and drama. I will say at this time we are offering special assistance with training in music dance and drama, sound production, sound and lighting for the performing arts centre. 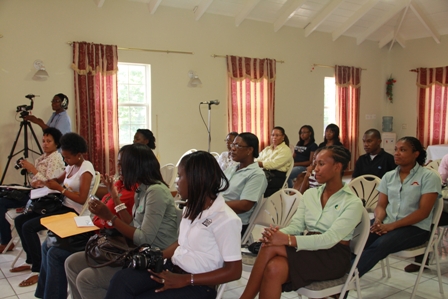 “We have invested in wind instruments. We have someone who trains persons to blow the trumpet and the trombone and so on, on a regular basis. We have established the Nevis Cultural Development Foundation to drive round the interest in culture and of course we have established some community festivals, the leading one is Winfest. So our interest in culture is paramount and it is also connected to the tourism industry, where we add another component to the tourism product,” he said.

According to Mr. Daniel, the Nevis Performing Arts Centre would be used during the Culturama season and stated that the Rhythms Dance Theatre would have a production at the Michael Sutton Auditorium.  He added that the Shekinah Dance Group also planned a production as well and there was interest by visiting groups to perform at the same venue later in the year.