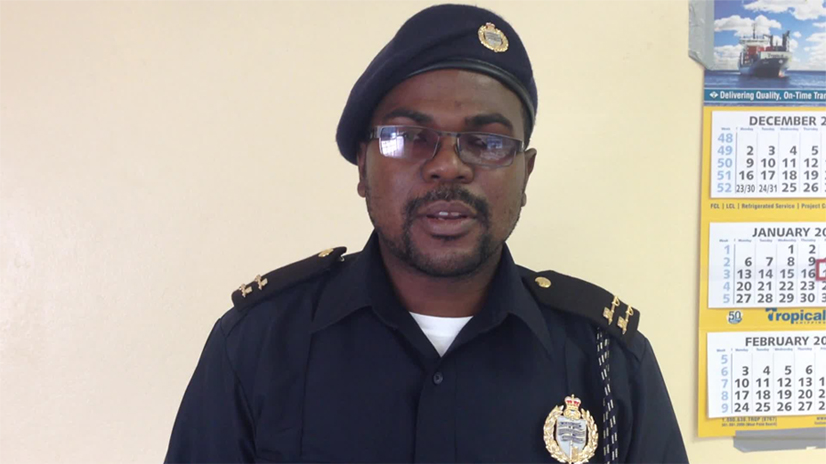 Roger Fyfield, Assistant Comptroller of the St. Kitts and Nevis Customs and Excise Department on Nevis
NIA CHARLESTOWN NEVIS (January 22, 2014) — The Customs and Excise Officers on Nevis will join their counterparts around the world for the second time in celebration of the annual International Customs Day on January 26, 2014.
However, Roger Fyfield who is the Assistant Comptroller of the St. Kitts and Nevis Customs and Excise Department in Nevis told the Department of Information on January 21, 2014, that the observance would take the form of a week of activities.
“We actually have World Customs Day which is celebrated every year on the 26th of January and to commemorate that day we are having a week of activities from the 26th of January running through to the 1st of February.
“The theme for the week is ‘Communication: Sharing information for better cooperation’ and it is centred around Customs and sharing information not just with Customs Officers but with the community at large because we are not isolated, we need information as a law enforcement agency to function at optimum,” he said.
According to the programme of activities, the observance will begin with a worship service at 11:15 a.m. on January 26, 2014 at the Shiloh Baptist Church , followed by a luncheon for all staff members at the Nisbet Plantation Beach Club.
On Monday January 27, Customs Officers will host talks centred on this year’s theme at the Violet O. Jeffers Nicholls, Elizabeth Pemberton, St. James and St. Thomas Primary Schools.
Mr. Fyfield added that January 28, would be used as an Officer Exchange Day while January 29 would be used for a new addition to the programme of activities.
“We have what we call Officer Exchange Day. We will be having 14 of our Officers going over to St. Kitts and working for that day and 14 officers from St. Kitts coming across to Nevis to work for that particular day.
“On Wednesday 29th we will be having a panel discussion and this will be aired on Nevis Television on Thursday evening, the 30th.  [Also] on the 30th at 9 a.m. we will be having Customs Open Day and we are taking this opportunity to invite the general public to come and share with us; ask questions and to find out how the Customs [Department] operates,” he said.
Mr. Fyfield noted that Friday 31st would be used for a visit to the residents of the St. Georges and St. Johns Senior Citizens Home and also serve lunch.
The week of activities will culminate on Saturday February 1st when the Customs Officers on Nevis will join their counterparts in St. Kitts for a “beachnic.”
International Customs Day was designated by the World Customs Organisation based in Brussels, Belgium. The Organisation has a membership of 179 members, three-quarters of which are from developing countries which have the responsibility to manage more than 98 percent of the world’s trade.
The membership is divided into six regions: South America, North America, Central America and the Caribbean; Europe; Far East, South East Asia, Australia and Pacific Islands; North Africa, Near and Middle East; West and Central Africa and the East and Southern Africa.