NIA-CHARLESTOWN NEVIS (March 15, 2011) — The Department and Ministry of Education on Nevis continued to see results, thanks to several initiatives implemented in schools, in an attempt to stamp out deviant behaviour among the island’s youths but warned that students who perpetuated acts of violence would not be tolerated.

Principal Education Officer (PEO) in the Ministry of Education Mrs. Lornette Queeley Connor made the disclosure on Thursday, when she delivered a report at the second Symposium on Crime with the theme “Reclaiming out Society”. It was hosted by the Premier’s Ministry in the Nevis Island Administration (NIA) on Thursday at the Red Cross Building in Charlestown. The first forum was held in May 2010.

“The position of the Department has seen a gradual change from understanding and leniency to a rigid and firm position of zero tolerance for violence. Our [Education] Department has taken the position that no excuse or reason would be an acceptable one for perpetuating an act of violence and that law enforcement would be contacted to deal with all students who violate the law and we are serious.

“Valuable time would not be devoted to deal with repeat offenders and that all subsequent infractions would be referred to the police for resolution. I repeat we are serious! We do not intend to have repeat offenders coming to the Department of Education for intervention with the psychologist. We feel that time could be better spent learning school work, that is what children go to school for, to learn school work. Of course there are other interactions which are necessary,” she said.

Mrs. Queeley Connor noted it had been made clear that children would no longer be brought to the Department for meetings. 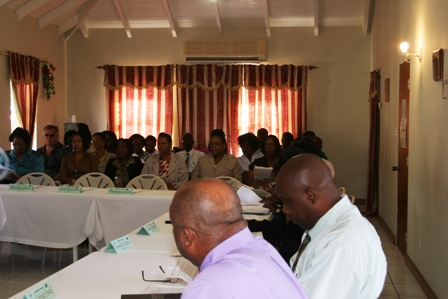 “We are asking parents to send their children to school to learn and we are asking children when they go to school to stay in school and learn do not fight, don’t curse, don’t throw stones don’t do anything where you are acting in contravention of the school rules,” she said.

According to the PEO, the Education Department continued to do all in its power to curb incidences of deviant behaviour and spoke to a number of initiatives that had been implemented at both Primary and Secondary schools on Nevis.

An Anger Management and Conflict Resolution Programme, an initiative of the Ministry of Education in the Federal Government in 2010 which was sponsored by the Organization of American States for secondary and primary students, teachers, guidance counsellors and parent focus groups, had assisted the schools.

“It is the general consensus that what the primary schools have been doing seem to have been working to everybody’s benefit. However, the Virtues Project has been implemented by the Guidance Counsellors in schools that had not been following the programme. They have been in healthy discussions with School’s Psychologist Dr. Swanston and it is reported that classroom sessions are done using the Virtues such as humility, confidence, integrity, compassion etc.

“Our students then, are encouraged to live by their highest values. To be honest and sincere, to listen to their conscience and to do the right thing and to tell the truth at all times. They are constantly reminded that their words and actions must match; that they should have respect and a peaceful heart,” she said. 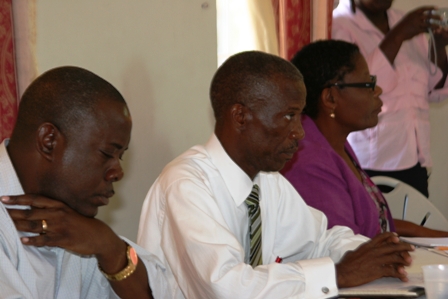 With specific reference to the two secondary schools on the island, Mrs. Queeley Connor explained that they had continued to play their part through prayer, Scripture reading and song or some sort of religious worship during morning assembly, which usually set the tone for thinking about Christ.

The PEO also pointed to increased emphasis and support for the Technical and Vocational Education Training (TVET). A series of meetings in an effort to reorient the way TVET was thought of and the way it was envisioned going forward had been effected.

She also spoke of Police involvement in the schools and pointed to the recommitment of the Royal St. Christopher and Nevis Police Force to building partnerships with the Department of Education.

As a result, Liaison Officers had been reassigned to the schools with a mandate to develop a sense of civic responsibility amongst school children in collaboration with principal and staff; to identify high risk children at an early stage; to identify children who were involved in truancy and bullying; to develop and maintain relationships between the Police Force, the school and pupils; to assist the school in developing conflict resolution programmes and to develop links between crime prevention and community policing that would emphasise the importance for community safety.

Mrs. Queeley Connor also highlighted the importance of student councils and said the Department of Education had redoubled its efforts to engage students in active leadership roles.

“I am therefore happy to announce that Nevis is currently the only island in the OECS with functioning student councils in all schools both public and private.

“The Federal Ministry has indicated their desire to have some 30 students and two adults join our April 2011 Student Council Executive Training Workshop here in Nevis at the Red Cross Centre,” she said.

Other areas that came into sharp focus during PEO’s presentation were the empowerment of teachers; the Induction Programme for new teachers who were taught classroom management and work ethics; the Better Parenting Workshops convened by the Early Childhood Sector which addressed topics such as Promoting Self Esteem in Children; Handling Anger and Conflicts in the Family; When Parents Need Extra Help with Children’s Behaviour; Discipline vs. Punishment – Reinforcing the Behaviour We Want and Preventing Child Abuse and Injuries.

Also the Pre School Transition Programme which has been sustained with workshops for new parents conducted at each primary school in the months of July-September. New students go through orientation and teachers are monitored to help the students make the transition.

The Primary to Secondary School Transition Programme was launched by Ms. Andrea Bussue in July 2011, under the auspices of a registered foundation known as “Children Are Precious”. The theme was “Transition – Bridging the Challenges of Adolescence”. Training sessions have been conducted with the first form students of the Gingerland Secondary School on topics which included study organisation and skills and scheduling.

According to the PEO, the Programme will be followed up by monitoring the student’s test scores and report cards to check on coping skills. In addition, a database had been created at the Department of Education on all Secondary Schools to track academic performance and attrition rate of all 1st form students.

Mrs. Queeley Connor also spoke to the Department’s initiative in which the schools called employers to seek time off for parents to come to the school to speak with the teachers and principals on matters pertaining to their children

“Sometimes we call parents and they say ‘I can’t come because I have to go to work’ or ‘I have to go in early today’. What we have been doing? We have been calling their employers directly and they have been getting the time off,” she said.