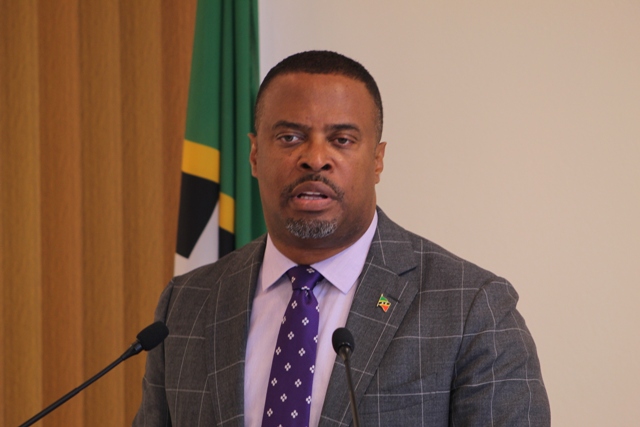 Hon. Mark Brantley, Premier of Nevis and Minister of Finance, at his final press conference for 2018 at the Cabinet Room at Pinney’s Estate on November 20, 2018

NIA CHARLESTOWN NEVIS (November 20, 2018) — Hon. Mark Brantley, Premier of Nevis and Minister of Finance, described an increase in employment figures on Nevis for the first half of 2018 as encouraging.

The Premier stated that statistics from a comparative analysis report for January to June 2018 versus 2017 conducted by the St. Christopher and Nevis Social Security Board revealed the increase, when he made a presentation at his final press conference for 2018 at Pinney’s Estate on November 20, 2018.

“I think we can all agree that if self-employment is grown by 31 percent, according to the official statistics at Social Security, and new employee registration has grown by 75 percent that we can say that something good is happening in employment in Nevis.

“We hope that the figures will hold for the balance of the year, so we look forward to seeing those numbers for the end of the year but certainly, I think that those numbers are encouraging for the island of Nevis moving forward,” he said.

Mr. Brantley explained that the data for the period under review revealed that 217 persons registered and among them 109 or 50.2 percent were female and 108 or 49 percent were male.

The finance minister expressed the view that new registrants are not always captured by Social Security, however, he believes that the figures revealed in the statistics suggest the possibility of even greater numbers introduced to the work force on the island.

“When we see numbers like this, we can deduce that the numbers are in fact higher in terms of employment … but for Nevis to record a 75 percent increase in new registrations, meaning new workers, new people coming unto the rolls of Social Security for the first six months of 2018 compared to 2017, I think that is significant for us as a small economy trying to create jobs and create employment,” he said.